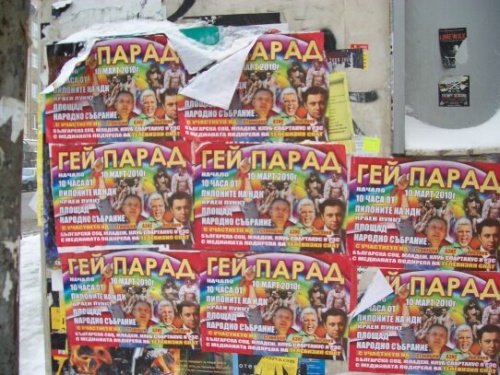 Posters advertising what seems to be a fake gay pride parade featuring ex two political leaders and a top singer have appeared all over Sofia.

They advertise a gay parade allegedly scheduled for March 10, 2010, to take place from the National Palace of Culture to the National Assembly Square in Sofia.

The day and the place of the parade coincide with the national protest rally organized by the conservative RZS party, which had been announced by the RZS leader Yanev in January, in a predictably doomed attempt to bring about early elections.

The real authors of the posters remain unclear. The message of the posters seems to play on the allegations made by the nationalist party Ataka that the RZS leader Yane Yanev is gay and should admit his sexual orientation because otherwise he would be susceptible to blackmailing – something which Yanev has refuted; various publications over the years have point to former Prime Minister Sergey Stanishev as being gay of which there has been no evidence. On the other hand, pop folk singer Azis has freely advertised the fact that he is gay, making this a part of his image.

The SKAT TV used to be an outlet for media appearances of the Ataka party leader Volen Siderov but its owned Valeri Simeonov and Siderov have recently fallen out exchanging anathemas over the party’s informal alliance with the Borisov government.