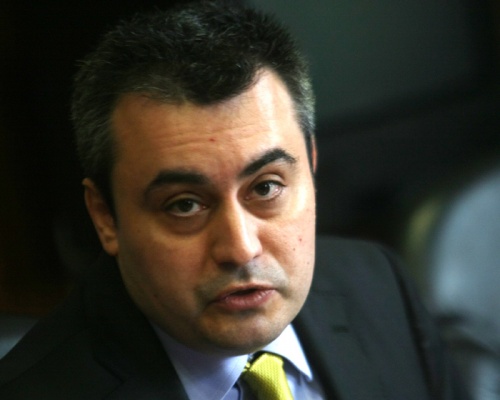 The cost of fake documents to support applications for Bulgarian citizenship is in the thousands, if not more, according to Nikolay Kokinov, the Sofia City Prosecutor. Photo by BGNES

The actual price depends on whether the applicant for citizenship has a criminal record or any other official problems, Nikolay Kokinov, the Sofia City Prosecutor, has revealed.

The Chief Secretary of the Agency for Bulgarians Abroad, Stefan Nikolov was the most recent person to be arrested in this connection, Kokinov said on Tuesday, adding that there was hardly anybody else of a lower rank than him involved in this matter.

The scheme in which the Director of Migration of the Interior Ministry, Stefan Hristov, was involved had been operating for at least six months, according to the prosecutor.

He stated that the prosecution would seek on Thursday permanent custody for Nikolov. Hristov is already subject to a similar detention order.

As the Sofia City Prosecutor's office has not yet received notification of the cause of death of Ahmed Emin, nor the associated DANS report, it has no choice but to open its own investigative checks, Kokinov said. Emin, a Turkish party DPS politician, had committed suicide in mysterious circumstances in 2008.

Commenting on the "Octopus" group cases, he stated that witnesses continue to present themselves voluntarily to testify, according to the assigned investigative team.

Following the release of several of the accused, the prosecution had no information as to whether pressure had been exerted on witnesses who had already given evidence. According to the prosecutor, the "Octopus" case will not come to trail for another three or four months.

Kokinov further remarked that his office was engaged in some 20-30 proceedings against judges. Each of them was a different case, he added, saying that it was not appropriate to speak of a criminal group.