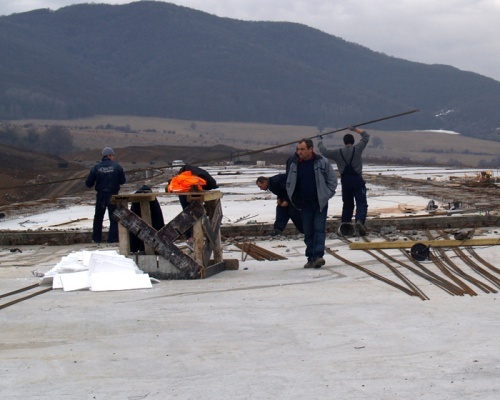 The consortium building the Lyulin Highway is asking for additional cash, to complete the delayed project on time. Photo by BGNES

Turkish consortium "Mapa Cengiz", which is responsible for construction of the Lyulin Highway on the outskirts of the Bulgarian capital Sofia, has requested a further EUR 60 - EUR 70 to complete the project.

The consortium had submitted a list of 38 complaints to the Regional Development Ministry, according to a statement on Monday by Rosen Plevneliev, the responsible Minister.

Plevneliev commented that he believed the consortium had made a good case in their submission. They had claimed that the delay in construction - the project is one year behind schedule - had been caused by a combination of external factors.

The Minister explained that each grievance was being separately discussed. He also stated that the two sides were quite far apart at present.

"Their claims are very different from what we are ready to satisfy," he noted, adding that he had set an ultimatum, to have an agreement signed by Wednesday.

Plevneliev said that there was a general feeling that the total cost of the complete project should cost no more than EUR 160 M. "Mapa-Cengiz" had won the tender at an initial projected cost of EUR 137 M.

The Turkish consortium has reached agreement on another problem that had long been affecting the highway project -  complaints about the lower wages they paid their Bulgarian workers compared with the Turkish workforce.

Following a direct intervention by Totyu Mladenov, Minister of Labor and Social Policy, the company management and the Confederation of Independent Trades Unions in Bulgaria (CITUB) have agreed a number of conditions.

The company is to increase the salaries of Bulgarian workers, bringing them into line with the pay their Turkish co-workers already receive. The lowest level is increased from BGN 310 to BGN 380, with higher-skilled workers and specialists receiving between BGN 685 to BGN 800 per month. The overall rate of pay increase to the Bulgarian workforce is of the order of 20%.

There is to be a revision of the labor profile. Currently, there are some 350 Turkish employees, and a similar number of Bulgarians. The company has agreed to reduce the Turkish contingent to 200, and to increase the Bulgarian workforce to approximately 1 300.

Workers will be recruited through labor agencies, and from the unemployed. The rearrangement is to be in place by March 31, Labor Minister Mladenov has decreed, adding that he will carry out a compliance check on that date. If the company has not fully complied by the stated deadline, the Minister has threatened to rescind its permit to employ workers from outside the European Union.

The Lyulin Highway project must be completed by the end of 2010. Otherwise, the Bulgarian government will have to return the European funding allocated as part of the contract.