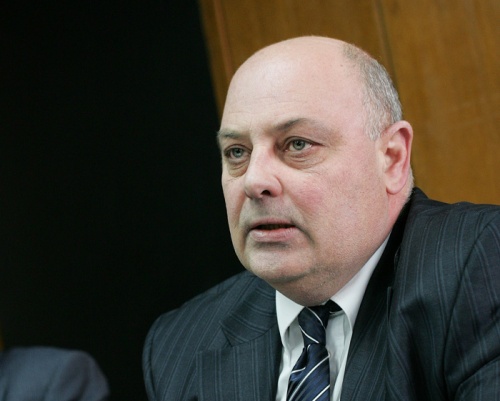 Bozhidar Yotov, head of the Bulgarian Road Agency, has explained the reasons the recent Trakiya Highway contract was awarded to 'Trace' consortium, while a Croatian competitor states it will lodge an appeal against the decision. Photo by BGNES

Croatian company "Constructor" has stated that it will appeal against the result of the tender for construction of a new section of Bulgaria's Trakiya Highway, which is to link the towns of Stara Zagora and Nova Zagora.

The contract had been officially awarded on February 26 to "Unified Highway Trace", a Bulgarian consortium, following a bidding process that had seen four candidates among the final eight eliminated on technicalities. Construction work is scheduled to begin on May 3.

The Croatian company had been eliminated because it had not submitted a declaration of conflict of interests, the Bulgarian Road Infrastructure Agency announced on Monday. "Constructor" was part of the consortium including "Road Construction Plovdiv", a company owned by Vasil Bozhkov.

Another participant in the tender, Austria's "Strabag", had previously lodged an appeal with the Bulgarian competition wacthdog. This has also been rejected. They were disqualified because of their failure to present the original bank guarantee, the lack of a linear project schedule, and because their nominee for deputy site manager did not have the required 10 years' experience.

Turkish company "Doush", which has been involved in construction of the Sofia metro extensions, was disqualified because of failure to present an electronic carrier, failure to follow the schedule for implementation of the project, and for proposing a railroad engineer as team leader.

The decision to award the contract to "Unified Highway Trace" was explained on Monday by Bozhidar Yotov, Chairman of the Board of the Road Infrastructure Agency.

"The arguments for the choice of the Bulgarian alliance ["Trace"] are the full mobilization readiness of the companies, its bases and quarries available in the area of the highway construction, the company's experience of the construction of a section of the highway from Orizovo to Stara Zagora, the low profit levels they have included, and the logistics unit which will manage and minimize risks for project implementation," he stated.

"Construction of the new Trakiya section will open up 4 000 new jobs, but my ambition is to open new 9 000 jobs for the entire length of nearly 116 kilometers," Rosen Plevneliev, Minister of Regional Development, stated, noting that that about 50 000 workers in the Bulgarian construction sector are currently jobless.

Meanwhile, the conditions of the Lot 3 tender for the next stretch of highway, from Nova Zagora to Yambol, have been published.

"They are relaxed for firms as the state will cover part of the risks on its behalf," said Georgi Pregyov, Deputy Minister of Regional Development, explaining there were changes in the terms, partly as a result of the large price differences submitted in the previous process, and because, on this occasion, the Bulgarian state will cover part of the risks associated with the project.

In the new tender, the state is to cover the risk for geological studies, as well as the inadequacy of the technical infrastructure of the existing cadastral map.

The deadline for submission of offers is 3:00 pm on Monday, April 26, 2010, and they will be opened the following day.