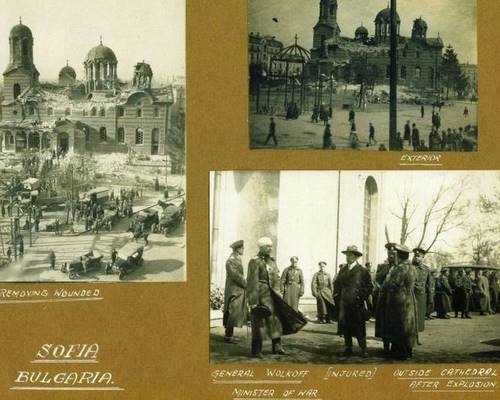 St Nedelya Church after the assault in April 1925. Source: — St Nedelya after the 1925 assault, part of the Old Sofia gallery.

The St Nedelya Church assault, a terrorist attack on St. Nedelya Church in Bulgaria, carried out on 16 April 1925, has garnered the most votes in the crime category of a poll for the country's top event during the past century.

The on-line and text messaging campaign is organized by the Bulgarian National Television and aims to elect Bulgaria's most important political, cultural and scientific achievements over the 20th century.

This occurred during the funeral service of General Konstantin Georgiev, who had been killed in a previous Communist assault on 14 April. 150 people, mainly from the country's political and military elite, were killed in the attack and around 500 were injured.

Bulgarians recently named the emblematic date September 9, marking Bulgaria's anti-fascist uprising in 1944, the most important political event in the country for the past century.

An appliance for roasting peppers, called "chushkopek“, was voted the most revolutionary household device.