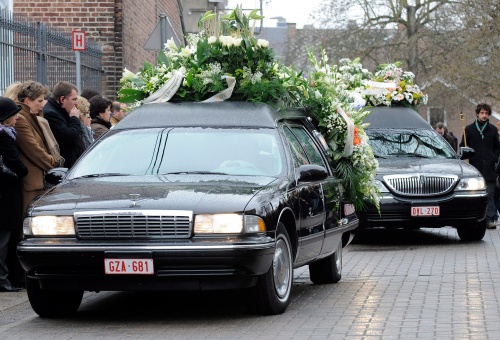 On Monday, the Belgium city of Liege began burying the bodies of the identified victims of a fatal building explosion. Photo by BGNES

There is still a possibility that a Bulgarian family has been buried under the rubble of the building destroyed by a gas explosion in Liege, Belgium.

The Belgium daily “Derniere Heure” writes Tuesday that there is serious doubt a Bulgarian family has died during the blast and that a reporter has arrived in Liege from Sofia to investigate the case.

The explosion happened on January 27 and reports about Bulgarian casualties have been quite contracting. It was reported first by Bulgaria's Deputy Foreign Minister, Marin Raikov, that 4 Bulgarians died in the collapse and 2 were injured. On Monday, however, the Foreign Ministry, disproved the previous reports, saying according to the Bulgarian Embassy in Brussels, no Bulgarians were killed by the explosion.

The “Derniere Heure” article writes that all residents in building # 20 have been identified while for building # 18 only tenants and owners occupying the basement and and floors 1 to 4 are known, but it is not clear who lived on the 5th floor.

This is how the hypothesis that a Bulgarian family could be among the victims has come up, the article explains, adding no relatives or friends have inquired about the Bulgarians, but a Bulgarian journalist is in Liege, convinced fellow countrymen perished in the collapse.

The search for bodies continued all through Monday night, however no new causalities are reported.

According to local authorities, it would become clear by Wednesday night if there are other victims in addition to the 12 bodies that have been discovered. 7 are yet to be identified, a difficult task since, reportedly, they have been illegally occupying the building.