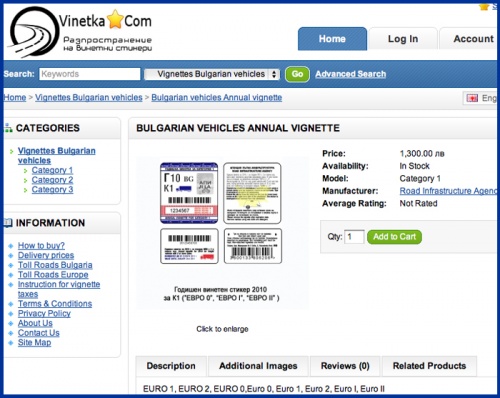 Vehicle tax vignettes for 2010 are obligatory as of February 1, and can now also be purchased online. Photo by vinetka.com

All vehicles using the Bulgarian road network need to display a valid 2010 vignette as of February 1, otherwise they risk a fine of between BGN 100 and BGN 1 000.

The only roads exempt from the need for a vignette are those in cities and ring-roads, towns and villages.

In December, it had been announced that a consortium between EIBank and VIP Security would distribute the road vignette stickers in Bulgaria for the next four years.

There were delays in setting up the distribution system, and in the printing of the vehicle tax stickers. The Bulgarian Road Infrastructure Agency (RIA) had extended the validity of 2009 vignettes to 13 months.

In addition to the traditional outlets for buying vignettes – border crossings and petrol stations, they can now be purchased online. The operating consortium has published an e-shopping site, in Bulgarian and English, with payments online and delivery of the sticker by courier.

The site contains comprehensive information, and is accessible at www.vinetka.com. Vignette costs remain at the levels of 2009, despite a short-lived proposal to raise the levels to plug some of the shortfall in revenue of the RIA.