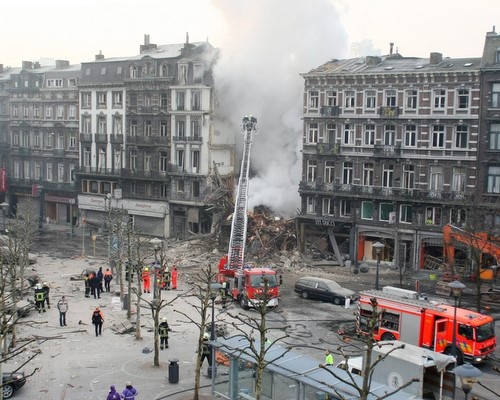 Firemen try to extinguish the fire caused by a gas exlosion in a building of five floors at Leopold street, Liege city center, Belgium, 27 January 2010. Photo by EPA/BGNES

Four Bulgarians are believed to have died when a block of flats collapsed in the city of Liege in eastern Belgium last Wednesday, officials say.

Two Bulgarian women, who were among the 21 injured in the blast, have told authoirities that there were another four Bulgarians in the building.

“This gives us grounds to believe that these four Bulgarians are among the twelve casualties of the incident,” Deputy Foreign Minister Marin Raykov told the local Novinar daily.

The charred bodies have not been identified yet.

Raykov pointed out that the six Bulgarian nationals have not been registered at this address, which means that most probably they worked illegally.

The deputy minister assured that Bulgaria's Foreign Ministry keeps contact with the Belgian authorities, who have asked for DNA samples so that the bodies of the dead people can be identified.

“This is the reason why we have not yet contacted the relatives of those people. We can talk to them only after the casualties are identified,” he added.

Twelve people died as the explosion tore through the building at around 0200 local time on Wednesday, starting a fire. Then the five-storey building collapsed at around 0700.

Officials said the explosion was probably caused by a gas leak.

The blast blew out the windows of the city hall, 100m away, and spread dust throughout nearby streets.

It caused a fire that raged through the apartment block and billowed thick smoke.

They returned to the rubble and pulled a 13-year-old girl out alive.