Commercial Representation Head Mihailov: Bulgarian-Dutch Trade Is on the Rise 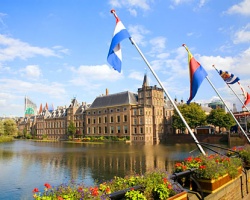 The Bulgarian Commercial Representation at the Hague is temporarily shut down. Photo by destination360.com

What is the condition of the trade of goods and services between Bulgaria and the Netherlands? What are the trends? How was the bilateral trade affected by the economic crisis?

The Kingdom of the Netherlands has leading positions in global trade and traditionally has a positive foreign trade balance. In 2008, it amounted to EUR 35,7 B. According to data of the World Trade Organization, in 2008, the country ranked fifth in terms of commercial turnover after Germany, China, the USA, and Japan.

If the volume of trade could be explained with the traditions (the East India Company and the Amsterdam Commodities Exchange have been in place since the 17th century) and the strategic geographic location of the country, the positive balance stands for the high efficiency and competitiveness of its economy.

The Netherlands was not spared by the economic crisis. It entered into a recession in the fourth quarter of 2008, and registered its first modest GDP growth of 0,4% in the third quarter of 2009. Thus, the period of declining GDP was exactly one year. During that time the GDP dropped by a total of 5,4%. As a result of the global problems caused by the financial crisis, the Dutch banks registered significant losses.

Despite that, the Dutch economy is doing well as a whole. The mid-term perspectives of the country register the first signs of the careful optimism which is characteristic of the Dutch. The only indicator on which the central bank registered growth in 2009 was the volume of savings – for one year they increased by EUR 25 B reaching EUR 289 B. This is a serious year growth which is mainly due to the economic insecurity and the typical thriftiness of the Dutch people.

The trade between Bulgaria and the Kingdom of the Netherlands over the last few years is increasingly intensive and substantial. The constant growth of the trade shows that the countries are integrating successfully in the global developments and international division of labor.

The good results from 2008 when Bulgaria’s export to the Netherlands grew by 31,5% and its Dutch import increased by 10,8% put the bar very high for the traditional economic entities engaged in the bilateral trade.

For 2009, we only have the data from the first nine months available. It shows that despite the crisis and the huge decline in the volumes of international trade, Bulgaria’s export to Holland is pretty much holding the positions it reached during the previous and very successful year.

Thus, in the first three quarters of 2009, Bulgaria’s export to the Netherlands droped by 6,5% year-on-year, whereas its import from Holland dropped by 25,3%. Actually, this has led to an improved trade balance for Bulgaria.

What are Bulgaria’s goods and services exported to the Netherlands, which ones are competitive on the Dutch market?

Bulgaria’s export to the Netherlands consists most of textile and clothes, refrigerating equipment, chemical products, furniture, forage and oil yielding crops, tobacco. The export of foodstuffs is generally on the rise.

What is the explanation for the fact that Bulgaria is the second largest foreign investor in Bulgaria?

The Netherlands is extremely popular among foreign investors as a place for setting up European headquarters of their companies. It is interesting to note that the international company for the construction and operation of the Burgas-Alexandroupolis oil pipeline (a project of Bulgaria, Greece, and Russia – editor’s note), is registered in Amsterdam.

Thus, a number of international companies investing in Bulgaria are counted as Dutch investors. Currently, according to the data of the World Economic Forum, Holland is ranked 10th in the list of most popular foreign investment destinations.

What would you say is the difference between the large Dutch-based multination companies and the small and medium sized enterprises with respect to their investments in Bulgaria?

There is a clear difference, and it mostly has to do with the differences in the marketing capacities and resources of the two types of companies.

What is the level of Bulgarian investments in the Netherlands? Are there many Bulgarian companies moving their headquarters to Holland as Prista Oil has done, for example? How can they benefit from that?

The answer to this question has to do with the specifics of the corporate income taxation and the high-developed sector of international financial and legal consultant services available in the Netherlands.

According to your impression, what do Dutch companies look for they invest in Bulgaria or trade with Bulgarian partners?

The Netherlands falls in the category of our partners who are the most critical of Bulgaria with respect to the results that we have achieved in fighting corruption and organized crime. After the publication of the EC interim report on Bulgaria under the Cooperation and Verification Mechanism in February 2009, the Dutch Minister Frans Timmermans said the Mechanism should be extended to become permanent.

In the following months, the Netherlands endorsed the idea of expanding the Mechanism and tying it to the allocation of EU funds and Bulgaria’s accession to the Schengen Area Agreement.

At the end of 2009, the Dutch Foreign Minister Verhagen publicly accused Bulgaria (and Romania) of failing to abide by their commitments, and EU Affairs Minister Frans Timmermans send a letter to EU Commissioner Jacques Barrot prompting the EC to consider potential sanctions against Bulgaria. The calls of the far right Freedom Party for “throwing the corrupt Bulgaria and Romania out of the EU” have continued.

The rising euroscepticism in the Netherlands affected the discussions of the annual monitoring report of the European Commission from July 22, 2009. Yet, the calls that were heard in the Dutch Parliament in the fall of 2009 for the activation of a safeguard clause against Bulgaria freezing the EU funding for the country, and for binding the Cooperation and Verification Mechanism with the Schengen Area accession of Bulgaria, have been neutralized.

The strategically important place of the Netherlands among the other foreign investors in Bulgaria is creating opportunities for deepening the Bulgarian-Dutch economic relations by increasing the interest of Dutch investors in the large-scale infrastructure projects that are to be realized in Bulgaria.

There is definitely interest in this respect and it was demonstrated during the visit of Dutch business delegation including representatives of 15 companies (September 27 – October 1, 2009). The topic of the visit was “Infrastructure Projects in Bulgaria.” As part of its program, the Dutch delegation visited the Technology Fair in Plovdiv.

The Bulgarian Ministry of Economy organized presentations of the State Agency for Small and Medium-sized Enterprises, the Agency for Foreign Investments, and the State Company “Industrial Zones”. As a result, there have been specific declarations of intention to invest in Bulgaria.

On November 25, 2009, in the Dutch city of Zoetermeer, there was a follow-up meeting with the participants in the Dutch delegation and a number of leading firms. It is safe to say that Dutch business circles are actively interested in the opportunities of participating in the upcoming planning, construction and modernization of Bulgaria’s infrastructure in the field of gas distribution and waste water management. The encouragement of Dutch investors from the category of small and medium-sized enterprises is key.

What part of the Bulgarian-Dutch trade goes through the Rhein-Main-Danube river waterway?

I do not have any data available in that respect.

The Bulgarian Commercial Representation in the Netherlands has just been temporarily shut down because of the crisis. Is this going to damage the economic relations between the two countries? Are there any indications of when the mission might be restored?

It is definitely going to affect the economic relations, not to mention the fact that this has been done in total contradiction with the most basic norms of diplomacy. There have been no directions on part of the Ministry of Economy to inform the official Dutch institutions and business partners with whom we have been working, or for making this fact public on the economic website of the Bulgarian Embassy.

There is no indication if this closure of the Bulgarian Commercial Representation is temporary, or whether it is caused by some economization strategy, or whether a new commercial representative would be sent in my place after some time.

The only instructions I have received are from the accountants with respect to the termination of the contracts for telephone lines, Internet connection, bank account, and the storage of the property.

My personal opinion is that the “temporary closure” and the ensuing resuming of the activity of the Bulgarian Commercial Representation without the necessary continuity in that respect is going to lead to the loss of time, money, contacts, and last but not least, of Bulgaria’s image.

I am leaving it to you, the journalists, to find out what the motives and considerations for the closure are, and to track over time what consequences it is going to have, especially if it is a permanent shutdown, and whether it was caused by ad hoc considerations, if it is not a permanent measure.