General Manager of Heineken Zagorka Ruud van den Eijnden: Bulgarians Should Be Proactive like the Dutch 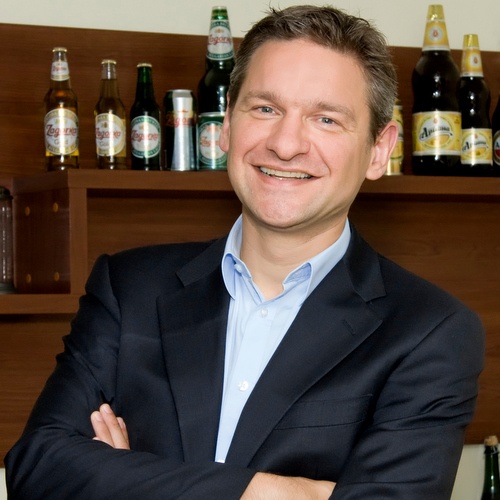 Heineken Zagorka AD is perhaps most popular Bulgarian beer producer, with the largest market share in Bulgaria. Would you say this is the result more of the traditional popularity of the Bulgarian brand Zagorka, or of the investment and innovations brought by Heineken since it took over in 1994?

I would definitely say both, as in our company we cherish very much the history and good traditions, especially of the strongest brand we have – Zagorka and Ariana. However, it is clear that being part of Heineken International brought the company many advantages and good opportunities for development. Not only the Heineken brand in itself, but also the fact of being part of an innovative and progressive company helped us in improving virtually every aspect of our business.

What is the scope of the Heineken operations in Bulgaria – in terms of total investment so far, employment, plans for future investments and expansions?

I am afraid that at this point I am not able to disclose specific financial information. But what I could say is that in the last years, millions of euros have been invested in developing our brewery, brands and people. We have the intention to keep investing in building further our business.

At this point Zagorka SA has 563 employees and we are happy to be the leader on the market with realizing a value market share of 37% in Bulgaria in 2009, as measured by AC Nielsen.

What has been the impact of the economic crisis on the Bulgarian beer market? Has Heineken had to resort to any optimization cuts?

As any other industry, the beer category has been impacted by the crisis in Bulgaria as well. Overall, we see a market decline of around 10-12% in 2009, which unfortunately in the second half of the year was significantly worse than the 1st half. As every company, we are closely monitoring costs, trying to optimize all expenses, but we did not take that drastic measures as count on our long term strategic planning and good forecasts.

How would you rate the popularity of the domestic vs. the foreign brands of Heineken in Bulgaria? Which ones are more successful and why?

In Zagorka SA we focus on our three strategic brands: Zagorka, Ariana and Heineken. I would say that all three are popular among Bulgarian consumers, as they are well developed and each serves a different consumer need. Both Zagorka and Ariana are our bigger domestic brands, they have a high performance in terms of volume. I would say that this is based on the fact that both brands have a well developed image among consumers and both have long traditions and history.

What share of the output of Heineken Zagorka goes for export? Is it Bulgarian or foreign brands that are exported? Are you focusing specific efforts on increasing production for foreign markets?

It is a fact that Bulgarians abroad love to drink a Zagorka every now and then. Via distributors in countries with a large Bulgarian community, we provide them the brand. However, I would admit that our export volumes are small, as we are more focused on the performance on local market.

How would you describe the beer market in Bulgaria and its competitiveness? How is the fact that one of Heineken’s largest competitors internationally, AB InBev, has recently divested from its Bulgarian brewery Kamenitza, as part of withdrawing from Eastern Europe, going to affect the beer market in the country? Do expect your market share to go up as a result of your competitor’s withdrawal?

I have to say that the beer market in Bulgaria is well developed and, before the crisis, has seen healthy growth in recent years, as the average consumption went up. I would like to highlight four characteristics of the market.

First, it is highly competitive, with all breweries putting support behind their brands. Second, the regional differences are still very important. Third, unlike many other countries, the majority of the volume is sold in big PET-bottles, the package that has driven growth in recent years. Fourth, the modern supermarket channel is still relatively small, but growing rapidly. Yet this is a market going through turbulent times, and as far as new competitor players are concerned, it is too early to make an evaluation on their performance.

Heineken Zagorka recently opened the first beer museum in Bulgaria. Has this been successful? What other social and public projects has the company been involved in?

“The World of Zagorka” is not just a museum; we’d like to describe it as an experience that we provide to real beer lovers, as it combines a guided tour in the brewery following the way of the beer with a unique exposition of various exponents showing the history of the brand and the company, and of course tasting of live beer.

Since the opening of “The World of Zagorka” we’ve had numerous visitors each weekend. We hope it will be even more successful this year, as we plan to develop it further with special entertainment zone and a gift shop. Apart from this initiative we have sponsorships in various sports and a donation programme.

As a foreign manager who has been in Bulgaria for a while, what do you find particularly striking or interesting about the business environment here and/or the country as a whole? What are major things that Bulgarians should learn from the Dutch in terms of doing business, management, or just in life in general?

First of all, having been here now for nine months, I have come to know Bulgaria as a beautiful country and Bulgarians as very friendly, open, pragmatic and flexible people. In general, I think the Bulgarians could learn from the Dutch to be a bit more pro-active, transparent and direct in certain situations, otherwise I would say that I find rather more similarities than differences.

On the other hand, I am convinced the Dutch would benefit a lot if we would have the same flexibility and focus on targets as Bulgarians have, and in particular, the good food and the enjoyment of having dinners and spending time together!