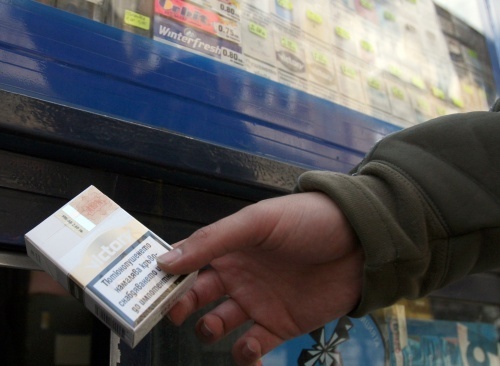 The new duties increase the price of a packet of cigarettes anywhere between BGN 1,10 and 1,40 making the price of the best-selling “Victory” brand BGN 5 instead of the current BGN 3,40. Photo by BGNES

The state-owned cigarette monopoly Bulgartabac has announced that the illegal trade in cigarettes will reach 40% of the total trade in 2010 over the recent increase in excise duty.

Bulgartabac reported that after a survey made by the company it is clear that smokers will look for an alternative source of cigarettes following the excise duty hike that came into force on January 1. They added that the current illegal trade in cigarettes amounts to 30% of the total which has risen from 15% at the same time in 2008.

Cigarettes currently remain much cheaper in the non-EU countries Macedonia, Serbia and the Ukraine which means Bulgarian cigarette smugglers source their tobacco products from these countries.

Bulgarian smokers had to swallow a raise in excise duties on cigarettes and their prices as of January 1, as the government struggles to curb smoking and relieve the health care system.

Under a decision that the Bulgarian parliament took at the end of November, a BGN 101 excise duty for 1000 cigarettes has now been introduced instead of the previous BGN 41, while the proportional tax is 23% of the sales price instead of 40,5%. The latter will affect mostly expensive cigarette brands.

The tax for tobacco for pipes and cigarettes is set at BGN 100 per kg. The new duties increase the price of a packet of cigarettes anywhere between BGN 1,10 and 1,40 making the price of the best-selling “Victory” brand BGN 5 instead of the current BGN 3,40.