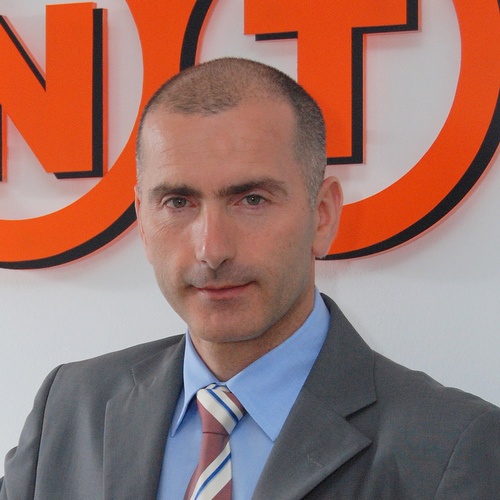 TNT entered Bulgaria in December 1995, and you have been the General Manager of TNT Bulgaria ever since. 14 years later, what are the parameters of TNT’s business activity in Bulgaria – how much has the company invested in Bulgaria (i.e. with the Netherlands being the second largest foreign investor in Bulgaria since 1996, what is TNT’s share of the Dutch investments in Bulgaria)?

TNT’s investments in Bulgaria since 1995 have not just financial but also a number of other aspects. If we start with the financial side, TNT has switched three head offices for the time we started operations in Bulgaria. And you know that only the investment in a new office premises is worth millions.

We have also invested a lot in equipment – not just cars, planes and trucks, which are usually associated with our type of business – but also in hi-tech, electronic devices, and computers – we apply the most recent technological achievements.

For example, we are the first company in the transport sector, and one of the first in the country, which introduced electronic invoicing for our customers. We have at our disposal the latest equipment – our couriers work with the so called “Mobile Worker In-cabs” - electronic devices which allow real time automatic online updates of the pick-up and delivery of a certain shipment, and also allow our customers to track their consignments electronically at any time.

But it is not just that. In addition to all the equipment and hi-end technologies, TNT is also considerably investing in projects related to social responsibility. This is the thing that I believe is a bench mark for TNT as a Dutch company. Unfortunately, we are unable to provide specific figures due to restrictions in our company investment policy, but the proof that our global efforts and stable performance are being recognised is that in 2009, for a third consecutive year, TNT reached the highest score of all companies included in the Dow Jones Sustainability Index.

TNT has business operations and investments all over the world. How does the company see the business environment in Bulgaria in comparison to other countries? What challenges has it been faced with in Bulgaria?

TNT delivery network not only covers all countries in the world, but we could also reach such exotic places as the South Pole for example. In 2005, TNT proved to be the only reliable transport company in Bulgaria to become partner of the Bulgarian science expedition to Antarctica “Tangra-Antarctica” and to successfully deliver their equipment to and from the closest possible point to the South Pole - Ushuaia, Argentina.

Despite the rather varying development of Bulgaria during the post-communist transition, TNT as a company is definitely seeing the business environment in Bulgaria as constantly improving. And we can say that compared to the beginning of the transition, doing business in Bulgaria is much easier, more civilized, and more European. Of course, there is a lot more to be done, but the at least we have a good ground and should keep the positive trend.

With respect to the challenges that we encounter when doing business in Bulgaria – they mostly have to do with Bulgarian mentality and culture – for example, negative attitude towards the work or the state, or even towards ourselves.

But there is something very important we have learned from our Dutch colleagues that we apply constantly and unconditionally – being positive, optimistic and pragmatic – this is when the results are achieved. And that is how in the current critical situation, TNT is one of the very few companies in our sector that has registered growth of the number of shipments and customers.

How has TNT Bulgaria been affected by the economic crisis?

We have been indeed positively affected by the crisis – as a result of it, we have managed to increase our market share. The beginning of the crisis helped us to focus, consolidate and optimize our processes, and to come up with more flexible solutions for the market. As a result, our clients increased by 5% year-on-year, (compared to the period before the crisis started), which actually led to the growth of our market share.

How competitive would you say the Bulgarian market for express delivery and cargo services is? What is your position compared to other companies – market share, services, etc?

It is very competitive and totally comparable to respective markets in any Western European state. All the large international companies from our sector (the so called “Express Integrators”) are well presented in Bulgaria, and they offer all services, which are offered in Europe and worldwide. So, we could say that generally we have a stable and healthy competitive environment. And the thing that maybe sets us apart from the other sectors of the economy is that our competition is very ethical. We have good relations with our colleagues, and when a common position is needed, we come together and we craft one – it could be related for example to the Customs system improvement, appliance of the EU regulations, and etc.

In 2007, TNT launched the Balkan Express service encompassing Bulgaria, Greece, and Romania. How successful has it been, is there much demand for it in the three Balkan countries?

The launch of the Balkan Express service was a local TNT initiative in Bulgaria, Romania and Greece. It was developed as a result of a common survey, which showed a customer demand for a direct, cross-border road transportation between our three neighboring countries. You can judge of its success from the fact that in less than two years time, Balkan Express connection is already part of the TNT European Express Road Network.

How does TNT as a company see the reforms in key Bulgarian institutions related to its activities such as the customs? What does Bulgaria still lack in that respect?

Bulgaria still lacks enough time to harmonize not just its customs procedures and ways of operation but also its other legislative norms with those of the EU. But I think that we are definitely moving in the right direction. It is another matter that sometimes we lose our way. But the direction is the right one. As they say, it is a matter of time before we become a full-fledged member of the European family.

TNT Bulgaria seems to be actively involved in a number of social projects. Could you tell us more about them, their scope, their impact, and, last but not least, the motivation behind them?

We really have a huge number of such projects. Our activities in the field of social responsibility are more indicative than a large-scale. After all, TNT Bulgaria is a company with several hundred employees, and its scope is somewhat limited compared, for example, to plants that employee several thousand.

But here as well our approach is purely Dutch, and the thing that we do have a huge public impact. I think we have managed to make an impact even with a relatively small budget. Thus, some two years ago, together with the former Netherlands Ambassador Willem van Ee and the former Sofia Mayor, now Prime Minister, Boyko Borisov, we launched a campaign called “Ride a bicycle, Arrive on Time”, which promotes bikes as transportation means in Sofia. The occasion on which we did it was a very interesting one – we saw a picture in the newspaper of the former Dutch Ambassador Van Ee going to work by bicycle. This is something that is totally natural for the Netherlands but for Bulgaria it is still exotic.

In addition to that, at the time we had several ladies working for us who would coming to work by bike, and we decided to promoting this thing, and to turn it into a company policy. We created company bikes that we presented to those employees who would sign a commitment certificate that they would replace their car with a bicycle. Now we are about to expand this campaign, which will also incorporate more of the Dutch practices. Of course, we have a number of other initiatives as well.

Building upon what you just mentioned - TNT NV is a huge multinational corporation, what is its approach to environmental issues and the fight against climate change? Does TNT Bulgaria have any other specific projects in that respect?

The bicycle project is one example. It is part of a global TNT campaign. It is a fact that all our operations are designed to protect the environment. Even the cars that we drive – my personal car – is environment-friendly – with low gas consumption, and small eco engine. Our prices are also designed to help this effort – clients who use more environment-friendly methods – such as using email instead of paper and telephone – get a 10% discount.

TNT Bulgaria is known for commitment to training and development of employees. What share of them are Bulgarian, are there many foreigners holding jobs at TNT Bulgaria? Have any Bulgarians risen to executive positions at TNT NV internationally?

The human resource issue is a very interesting one. Unfortunately, TNT is the only company in the country which holds the certificate “Investor in People” – for its commitment to training and development of its employees. But as far as the human capital in Bulgaria is concerned, it is undergoing an evolution from the post-communist ways in which everyone is just used to getting everything without working, and putting in efforts – to a human capital that has started to value the company and the manage who provides the salaries, and to respect and support them. This is a very important cultural evolution, and I am convinced that these values will come to the fore even more in a time of economic crisis.

We have many different examples of colleagues from TNT Bulgaria who are exporting their innovative Bulgarian experience to the company branches around the world. Very recently a colleague of ours from the financial department had to be transferred to Greece as an emergency in order to save their administrative systems because he is a very well-trained specialist. He went there in a hard time for the local branch, helped them out, they liked him, and he stayed. But that is not the only example, we have many colleagues who are already in the UK, the USA, the Netherlands, holding key positions. This is something that – as people like to say – we are proud of.

You will be one of the participants at an upcoming forum designed to attract young Bulgarians who studied abroad to start a career in Bulgaria. What are you going to tell these young Bulgarians?

I don’t know what they will ask me but in general, I would tell those young Bulgarians with colorful diplomas from abroad to take off their pink glasses, and to understand that they have to give before they can receive.