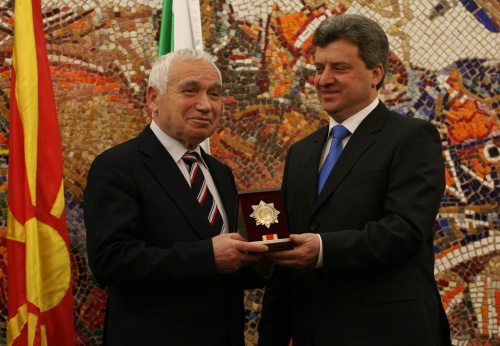 Bulgaria’s former President Zhelyu Zhelev was awarded a state order by Macedonia Friday for his contribution to the recognition of the independence of the former Yugoslav republic.

During a special ceremony in Skopje, acting Macedonian President George Ivanov stated that Macedonian citizens would never understand the hand extended to their country by Bulgaria 18 years ago.

Bulgaria was the first sovereign nation to recognize the independence of four former Yugoslav republics including Macedonia.

Macedonian President said no media publications could spoil the connections between the two countries despite the fact that some people were influenced by historical prejudice.

The award of the first democratically elected Bulgarian President generated lots of interest on part of the Macedonian media. Zhelev’s efforts are also connected with Macedonia’s recognition by countries such as Turkey and Russia.

Zhelyu Zhelev was Bulgarian President between 1991 and 1997.