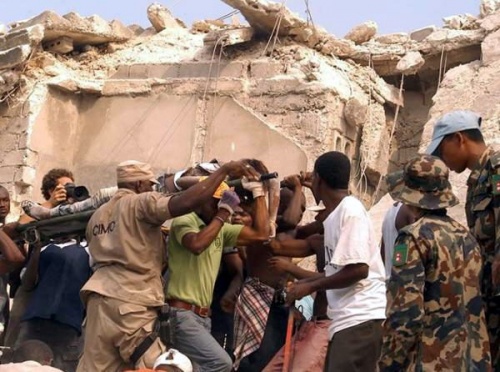 Bulgaria's Foreign minister has received no information about Bulgarian nationals among the casualties in the 7.0-magnitude quake, which hit south of the Haitian capital Port-au-Prince, its spokesman announced.

Bulgaria does not have an official diplomatic mission in Haiti, the closest representative office being located in Cuba.

A 7.0-magnitude quake which hit south of the Haitian capital Port-au-Prince is feared to have killed hundreds of people across the Caribbean country.

In the space of a minute, Haiti's worst quake in two centuries wrecked the HQ of the UN mission, the presidential palace and numerous other buildings.

A "large number" of UN personnel were reported missing by the organisation.

The capital is now said to be in total darkness with many people sleeping outside amid fear of more aftershocks.

Describing the earthquake as a "catastrophe", Haiti's envoy to the US said the cost of the damage could run into billions.

A number of nations, including the US, UK and Venezuela, are gearing up to send aid.

The quake, which struck about 15km (10 miles) south-west of Port-au-Prince, was quickly followed by two strong aftershocks of 5.9 and 5.5 magnitude.

The tremor hit at 1653 (2153 GMT), the US Geological Survey said. Phone lines to the country failed shortly afterwards.

Aid workers and reporters at the scene estimated the number of dead to be in the hundreds or even thousands.