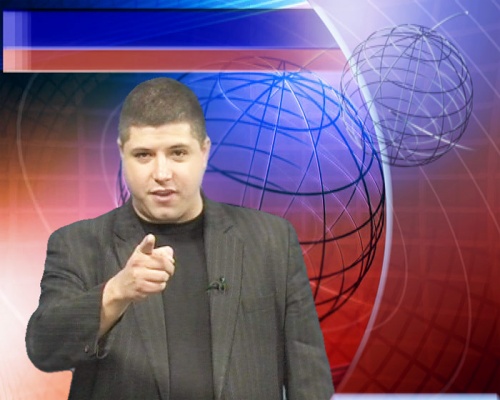 Bobi Tsankov in January 2009 as the anchor of the news emissions of the cable BGTV.

In a publication in the Bulgarian tabloid “Weekend” on September 29, 2009, Tsankov claims to have been a very close associate of Bulgarian mafia boss Konstantin Dimitrov, aka. Kosyo Samokovetsa, who was murdered in Amsterdam in 2003.

Tsankov also claims to have been the one who gave the legendary drug boss of Sofia Metodi Metodiev, aka Meto Ilienski, a fake passport after which Ilienski disappeared.

According to Tsankov’s article, he was very close with Kosyo Samokovetsa, a top leader of smuggling in the so called VIS group which at certain periods in the 1990s was the most powerful mafia structure in Bulgaria.

In November 2003, Samokovetsa asked Tsankov to pick up an envelope from one of his bodyguards and to give it to Meto Ilienski upon request.

Tsankov describes his meeting with Meto Ilienski at Dragichevo outside of Sofia, near Pernik, in November 2003, where Ilienski was “undercover” as he came alone with an old car, dressed in a sports suit even though he usually had at least ten bodyguards with several cars.

No one heard from Meto Ilienski any more, and even though the police have investigated his suspected kidnapping and murder. According to widespread rumors, however, Meto Ilienski – who was the undisputed boss of drug dealing in Sofia and “worked” successfully with all major criminal bosses who were more powerful than him – actually faked his own abduction, and left Bulgaria, most likely for Latin America.

Shortly after that as Meto Ilienski disappeared, Konstantin Dimitrov, aka Kosyo Samokovetsa was murdered in Amsterdam, the Netherlands.

Bobi Tsankov, according to his own account, was very close with Anton Miltenov, aka The Beak, a smaller-scale Sofia drug boss, who was shot dead in 2005. According to some unconfirmed accounts, the two were even in a homosexual relationship.

In December 2009, Tsankov published another excerpt from his book in the Weekend tabloid claiming that he was recently summoned to the same spot at Dragichevo where he gave Meto Ilienski his fake passport, and that a gangster who met him there told him that Meto Ilienski was alive, and had come back to Bulgaria but with a new appearance changed through plastic surgery. The man also told Tsankov that the murder of Kosyo Samokovetsa in Amsterdam in 2003 had been organized by the head of the VIS group Georgi Iliev because Samokovetsa had actually been trying to squeeze him out and to take over the group. Georgi Iliev himself is the brother of Vasil Iliev, the legendary founder of VIS who was murdered in 1995. Georgi Iliev is was shot dead near Sunny Beach in 2005.

In his recent publications, Tsankov also claims that businessman Manol Velev – a friend of Socialist President Georgi Parvanov and husband of former head of the Youth and Sports Agency Vesela Lecheva, who was shot in July 2007, and remained disabled – organized money laundering schemes through radio games. Tsankov has worked as a host in the Sport Radio, which was owned by Manol Velev, and was renamed Radio Energy in 2005.