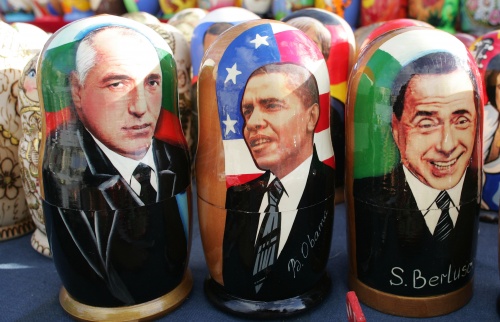 Matryoshka dolls of Boyko Borisov (left) are already sold in Sofia alongside those of Barack Obama and Silvio Berlusconi. Photo by BGNES

Matryoshka dolls of current Bulgarian Prime Minister Boyko Borisov have appeared on sale in downtown Sofia in the first days of 2010.

The Borisov matryoshka dolls are made in Russia, and are sold in front of the St. Alexander Nevsky Cathedral in the Bulgarian capital.

The interior of the Borisov matryoshka dolls contains progressively smaller figures of former Bulgarian Pirme Ministers – Sergey Stanishev and Simeon Saxe-Coburg, and even going as far back as the state communist leaders Todor Zhivkov and Georgi Dimitrov.

The Borisov matryoshkas cost BGN 40. According to the people sailing them, however, the most popular matryoshka dolls in Sofia are those of Italian Prime Minister Silvio Berlusconi because of the large number of Italian tourists coming to the Bulgarian capital recently.