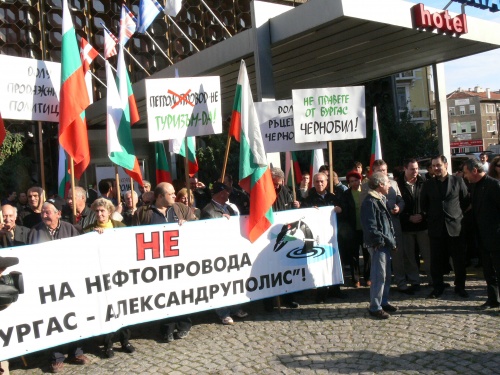 Environmentalists and citizens of Burgas protest against the Burgas-Alexandroupolis oil pipeline, February 2009. Photo by BGNES

Not unlike 2008, 2009 was marked by active environmentalist campaigns, led by the Greens party and a number of different NGOs united in the "For the Nature" Coalition, aiming at halting various construction projects across the country that they deemed illegal and devastating to Bulgaria's nature. Bulgarian environmentalists protested time and time again over the country's preoccupation with flogging the mountains of Rila, Pirin and Vitosha and the Irakli beach on the Black Sea coast to developers as quickly as possible.

In August, eco-activists declared the construction of new ski tracks on the Vitosha Mountain, situated next to the Bulgarian capital of Sofia, severe offense against the law. According to the organizational plan of the "Vitosha" Nature Park, approved by the Council of Ministers after serious dispute, the currents ski tracks can be only repaired and improved, but construction of new ones is not allowed. However, the detailed organizational plan of the park, foresees another 914 hectares of new facilities.

At the end of August, the expert council at the Regional Inspectorate for Environment and Waters gave a positive assessment of the plan to build new ski tracks and tourist facilities in the Vitosha Mountain near Sofia. The decision was appealed in court. In October, Bulgaria's Minister of Environment and Waters, Nona Karadzhova, annulled the Inspectorate’s assessment.

Also in October, conservationists warned that the protected area of the Seven Rila Lakes is being swamped by the unrestricted numbers of tourists, despite its official recognition as a limited access area. In December, a maintenance crew running a test on the lift at the Seven Rila Lakes, discovered that the main cable and safety lines had been deliberately cut overnight. Construction of the lift by the Rila Sport company had provoked a wave of protests by Bulgarian environmentalists, who had insisted the work is totally illegal. They, however, deny any involvement in the sabotage act.

In the summer, Bulgarian environmentalists from the "Clean Sea" organization also rallied against the planned Burgas-Alexandoupolis Oil Pipeline. The “Clean Sea” organization fears an environmental disaster resulting from an oil leak could destroy the lucrative tourism industry along Bulgaria's southern Black Sea coast. It submitted a letter to Stavros Dimas, European Commissioner for the Environment, asking him to intervene in the planned oil pipeline construction. In 2007 after more than a decade of intermittent talks, Bulgaria, Greece and Russia agreed to build the pipeline between Burgas and Alexandroupolis, taking Caspian oil to the Mediterranean skirting the congested Bosphorus.

On November 20, as the new GERB cabinet set an ambitious plan to deal with the waste disposal issue, establish a recycling program and punishing those who pollute nature and public spaces, the European Commission announced it will pursue court action against Bulgaria for failing to properly implement EU waste law. The move came two years after the launched of an infringement procedure on the issue, one of the 6 such procedures faced by Bulgaria since October 2007.

The case concerns inadequate waste disposal in the capital Sofia. This is the first trial launched by the European Commission against the EU newcomer. As Bulgaria failed to address the European executive's concerns, the matter has now to be referred to the European Court of Justice. The trial against Bulgaria is expected to last at least two years. It will be suspended provided that the country manages to deal with the shortcomings. The cities of Silistra, Plovdiv and Lovech, and the town of Harmanli have already agreed to transport hundreds of thousands of tons of waste collected from the capital to their landfills in a bid to rescue Sofia from its garbage woes.

Finding a solution to Sofia ongoing waste problems was a politically sensitive issue in the months before the parliamentary elections in the summer, which the Mayor of the capital Boyko Borisov won by a large margin. The previous Socialist-led government officially declared a state of emergency in Sofia at the beginning of April over lack of adequate waste removal, saying that the garbage problems threatened national security and citing health and environmental concerns. Borisov’s GERB dismissed this as pre-election muscle pumping.

The garbage problems came after people, living close to Sofia operational landfill at Suhodol, which reopened in 2007 to prevent a looming garbage crisis, started staging rallies, demanding the closing of the dumpsite over health and environmental concerns. Bulgaria may have to pay a daily fine of EUR 50 000 if it fails to find a legal depot for the baled garbage of the capital, Deputy Environment Minister Evdokiya Maneva said in September.

The Sofia City Hall and the cabinet allege that in crafting its decision to file a suit against Bulgaria, the EC had not taken into account the latest improvements and developments on the waste disposal in Sofia. They sent a letter to the EC expressing their disagreement with its conclusions and listing the steps that were taken to bring the capital in compliance with earlier remarks and recommendations by the EC and with European laws.

In December, as the international climate change summit was taking place in Copenhagen, the German company Siemens published a survey revealing the Denmark’s capital is the “greenest” city in Europe while Bulgaria’s Sofia is 29th out of a total of 30 cities. Earlier, an EU study warned that Bulgaria, Spain, Portugal, Italy and Greece are the countries that would be worst affected by global warming. In the aftermath, the Bulgarian Greens Party strongly criticized the Borisov cabinet for committing only EUR 40 000 to the EUR 7 B EU fund to help developing nations adapt to climate change. The Greens issued a declaration slamming the government for failing to pay its dues and to show solidarity with the processes during the climate change summit. They further suggested that the BGN 100 000 that their party deposited to the state budget in order to be allowed to participate in the 2009 elections should be directed to increase Bulgaria’s contribution to the EU climate change fund.

In March, 22 Bulgarian cities took part in "Earth Hour", the international campaign to raise awareness about global warming. 45 emblematic public buildings in downtown Sofia went dark as did, for the first time in its history, the medieval Bulgarian fortress of Tsarevets in the city of Veliko Turnovo.

In June, the UNESCO World Heritage Committee invited Bulgaria to improve the protection of the Pirin National park. UNESCO's additional conditions include maintaining and increasing the State subsidies for the Park's management, State guarantees that local and regional decisions would not contribute to the nature' further damage, proof that the procedures to evaluate and influence the environment are and will remain objective in the future.

Environment » Be a reporter: Write and send your article
Tags: The Bulgaria 2009 Review
Advertisement
Advertisement
Expats.bg All Are Welcome! Join Now!
Related Articles:
More from Environment