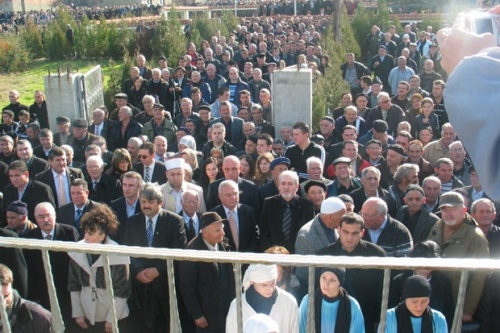 Several thousand people rallied to remember the assimilation campaign of the Bulgarian communist regime in the late 1980s. Photo by Darik News

Several thousand Bulgarian Turks rallied in the village of Mogilyane near Kardzhali Saturday to remember the 25th year since a protest against the assimilation campaign of the former communist regime.

The people gathered at the spot of Tyurkyan Chesma, a drinking fountain named after the 18-month old baby girl Tyurkyan, which was murdered on December 26, 1984, as the policemen fired into the crowd during a peaceful demonstration against the so called “Revival (or Regeneration) Process” – the campaign of the Bulgarian communist regime to assimilate the ethnic Turkish minority by changing their Arab Muslim names with Slavic ones.

The water fountain in the village of Mogilyane was built to honor the memory of the baby girl.

The rally was attended by leaders of the ethnic Turkish party “Movement for Rights and Freedoms” (DPS) including its Deputy Chair Lyutvi Mestan. The mother and sister of Tyurkyan also arrived from Turkey special for the memorial rally.

Mestan declared that the Bulgarian society still had not seen a catharsis after the Revival Process, and still had not reevaluated the events from the late 1980s.

Mestan spoke strongly against the proposal to hold a referendum on the broadcasting of Turkish-language daily news emissions on the Bulgarian national TV, saying that a latent nationalism had awoken in Bulgaria after the country joined the EU in 2007.

He declared there was “nothing European” in the holding of the proposed referendum since its outcome would be pre-determined.

Mestan slammed the ruling party GERB of PM Borisov for cooperating with the nationalist party Ataka of Volen Siderov.

“We will be supporting all constructive decisions but we will remain an unyielding opposition if someone touches our rights and freedoms and socio-economic interests,” Mestan stated.