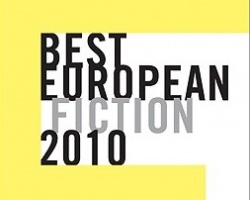 Bulgarian poet and writer Georgi Gospodinov is one of thirty-five European writers, featuring in the “Best European Fiction 2010”, which recently went on sale in the United States.

Including 35 stories from 30 countries, the book offers an appealingly diverse look at the Continent’s fiction scene: from prominent authors like Hungary’s George Konrad and Spain’s Julián Ríos to relative newcomers like Croatia’s Neven Usumovic and Ireland’s Julian Gough.

The Bulgarian import is called “All Turned Moon,” translated by Evgeniya Pancheva.

The book is published by Dalkey Archive Press and was edited by the Bosnian Aleksandar Hemon, who now lives in Chicago and says he considers himself both a European writer and an American one.

Assembling the collection, which involved finding and translating the stories, took about two years. Hemon chose pieces from more than 100 translated works, the only criteria being to include the best works from as many countries as possible. Arts Council England and other European cultural groups helped to fund the project.

Dalkey, a nonprofit based at the University of Illinois, is printing 25,000 copies, and plans to expand the project to other continents, starting with Asia.

In a review of the book, the Wall Street Journal wrote that “Bulgarian writer Georgi Gospodinov describes a dystopian future where plants and trees have no smell.“

Georgi Gospodinov was born in 1968. His first volume of poetry "Lapidarium" (1992) won a National Debut Prize. It was followed by "Chereshata na edin narod" (1996; t: The cherry tree of one nation), which was awarded the Best Book of the Year Prize from the Bulgarian Writers' Union.

Gospodinov’s first novel "Estestven roman" (1999; Eng. "Natural Novel", 2005) which has already been issued six times in Bulgaria made him particularly well known to an international audience. It was translated into ten languages. The "New Yorker" described it as an »anarchic, experimental debut" and "The Times" as a "humorous, melancholy and highly idiosyncratic work". "Natural Novel" takes up the post-modern structuring principle reminiscent of Borges and Pessoa. The main plot is interfused with multiple story lines, digressions and different levels of reflection loosely connected with one another.

Gospodinov’s next book, the volume of short stories "I drugi istorii" (2001; Eng. "And Other Stories", 2007), describes, sadly but comically, the mysteries of everyday life. Two poetry books followed: "Pisma do Gaustin" (2003; t: Letters to Gaustin) and later the collected volume "Baladi i razpadi" (2007; t: Baladies and maladies).

Gospodinov has also turned his interests towards the stage. The play "D.J." (the initials of Don Juan) was performed at the Satirical Theatre in Sofia in 2004 and won the prize for Play of the Year. It was staged in France and Austria, too. The East European film production "Lost and Found" – for which Gospodinov wrote the Bulgarian contribution’s screenplay, "The Ritual" – opened the International Forum of Young Cinema at the 2005 Berlin International Film Festival.