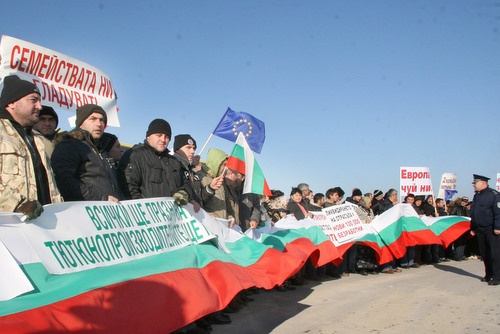 "Our families are starving", reads a banner of the 3 000 tobacco producers who blocked the Trakiya Highway near Plovdiv on Monday. Photo by BGNES

Bulgaria’s protesting tobacco producers can get only a tiny share of what they demand in government aid subsidies because of EU regulations.

This has been announced by Bulgaria’s Agriculture Minister, Miroslav Naydenov, shortly after 3 000 protesters blockaded the Trakiya Highway for two hours demanding that they be paid immediately BGN 180 M in state aid.

Naydenov arrived on the spot of the protest near the city of Plovdiv and met with the leaders of the Association of Tobacco Producers.

He said that under EU regulations Bulgaria was allowed to allot up to BGN 116 M annually in aid to the tobacco producers. It paid BGN 108 M in the spring of 2009, which meant it could now pay the protesters only the difference of BGN 8 M.

However, even the BGN 8 M in question have not been envisaged in the 2010 state budget.

“If we allocate to the tobacco producers more money than this sum, we will suffer sanctions by the European Commission, and they will have to return the money. In addition, they will lose the opportunity to apply for EU subsidies under the other programs for the next three years,” the Agriculture Minister said.

Some 3 000 tobacco producers gathered near the village of Trud outside of Plovdiv Monday. They came from Plovdiv, Pazadzhik, Stara Zagora, Haskovo, Ivaylovgrad, Krumovgrad and even from Northeastern Bulgaria.

According to the protesters, the money they have gotten per kilogram of produced tobacco in 2009 so far were 60%-70% less than what they got in 2008.

A meeting of the “Tobacco” Fund at the Bulgarian Agriculture Ministry is scheduled for later on Monday. It is expected to come up with a solution to the situation.