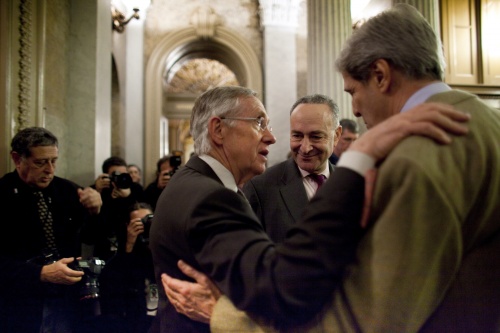 The Democrats in the US Senate managed to break the filibuster of the Republicans on the healthcare reform bill put forth by President Barack Obama in a vote at 1 am Eastern Time Monday.

Breaking the Republican filibuster required the votes of all 60 members of the Democratic caucus, and the Senate voted on party lines to do that with the cloture motion passed 60 to 40, the Los Angeles Times reported.

Thus, the Democrats overcame the first of the three major hurdles in the Senate before a final vote on the healthcare reform bill tentatively scheduled for 7 pm on Christmas Eve.

The Democrats have come together after months of debate on the bill put forth by President Barack Obama and by Senate Majority leader Harry Reid, which is supposed to providing insurance access to 31 million uninsured Americans.

If all cloture motions pass, the Senate will vote on the bill itself before Christmas. The healthcare reform is a key priority of US President Barack Obama.