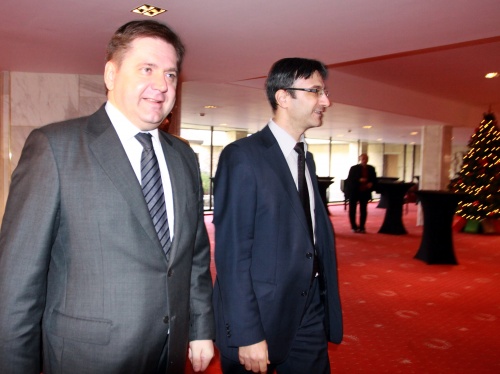 Bulgaria Minister of Economy, Energy and Tourism, Traicho Traikov, and the Minister of Energy of the Russian Federation, Sergey Shmatko, have jointly signed the Protocol of the 13th Intergovernmental Bulgarian-Russian Commission for Economic, Scientific and Technical Cooperation.

A coordinated plan for consultations between the foreign ministries of both countries has been agreed on Friday. Details were presented by Bulgarian Deputy Minister of Foreign Affairs, Marin Raikov, and by the Russian Ambassador to Bulgaria, Yuriy Isakov.

A package deal on the design and construction of a hydro-power and dam system "Indje Voivoda" was also signed by Nicholay Kratunov, Chairman of the Board of Directors of Hydrostroy - Burgas, for Bulgaria, and by Evgeni Gudzenchuk, CEO of OAO "Zarubezhvodstroy", for Russia.

A memorandum of mutual understanding and cooperation in the metrology sector between the Bulgarian Institute of Metrology and the Federal Agency for Technical Regulation and Metrology of the Russian Federation was also signed by Bulgarian and Russian representatives.

The Russian delegation had reported earlier on Friday that it was pleased with the positive way the Sofia talks had been conducted.