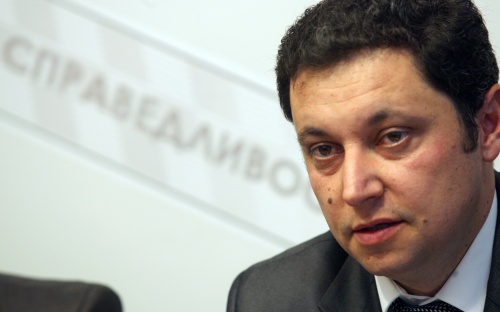 The conservative RZS leader, Yane Yanev, who was left without a parliamentayr group Wednesday directly blamed PM Boyko Borisov for the troubles he is facing. Photo by BGNES

Yanev made the statement Wednesday in the Parliament's hallway, after it became clear that the Member of the Parliament from the conservative Order, Law and Justice party (RZS), Mario Tagarinski, is leaving the party's group and will remain in the Parliament as an independent MP.

Yanev further declared the RZS group will be transformed into a political one with 9 members.

“We from RZS are convinced the PM is replacing Bulgaria's EU values and with each day he becomes more and more dependent from the pro-Russian energy and political lobby. Bulgaria is becoming a Russian protectorate, a dependent country and the EU Trojan horse,” Yanev is quoted as saying, adding he was alarmed by the fact Borisov seems unaware he is substituting the Bulgarian voters' decision.

The conservative leader further informed he had information that Mario Tagarinski belongs to the “energy mafia” in Bulgaria.

Yanev believes the whole incident is aimed at his removal from the President's Consultative Council on National Security (KSNS), but reiterated RZS would still fulfill their promise to support Borisov's ruling Citizens for European Development of Bulgaria (GERB) party cabinet for the first 6 months.

“Unlike PM Borisov, we from RZS fulfill our commitments. The 6 month expires on January 27 at 4:24 pm – this is the time the gratitude also expires because it was at 4:24 pm when I received a grateful short text message from the PM,” Yanev said.

RZS further demand answers from Tagarinski regarding his alleged ties with the energy and transport sector. Yanev threatened to submit all signals about what he calls “the energy mafia” to the Prosecution.

The conservative leader also insists that the Parliamentary Code has at least 10 anti-constitutional texts and was adamant the RZS parliamentary group would be reinstated one day with way more MPs than the 10 the party had until now.

The RZS MPs have no intentions to resign from the parliamentary committees they have been assigned to because the status of independent MPs remains unclear, they say.

Dimitar Abadzhiev, another MP from RZS, also believes Mario Tagarinski has been given a key role in carrying out the secret agreement between the President, GERB and Ivan Kostov's Democrats for Strong Bulgaria, which is one of the two parties in the rightist Blue Coalition, wishing to increase their influence by dismantling the RZS group.

The whole issue was triggered by Tagarinski, who announced last Friday he was leaving the RZS parliamentary group. This move led to the group falling apart since it now has 9 members instead of the required minimum of 10.

On Tuesday, the RZS MPs submitted a request to amend the code so that a parliamentary group could be formed by 8 MPs.