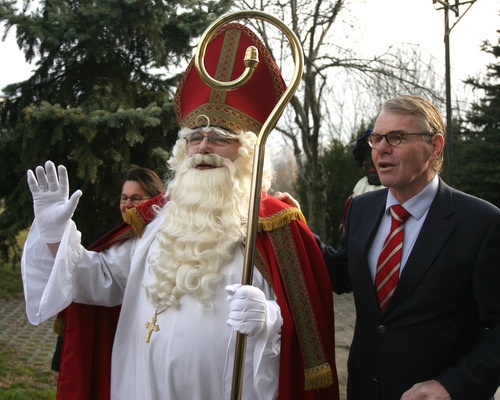 Sinterklaas, the Dutch version of Santa Claus, was welcomed in the Bulgarian capital by the Ambassador of the Netherlands here Karel van Kesteren (R). Photo by BGNES

Sinterklaas, the Dutch version of Santa Claus, crossed downtown Sofia on Saturday afternoon, riding horseback in what has become a traditional celebration of the Netherlands' embassy in Bulgaria.

The pleasant surprise for Sofia citizens was initiated by the Dutch community in Bulgaria, which celebrated St. Nicholas or "Sinterklaas" at the beginning of December.

Children and parents were thrilled by the surprise visit and while some rushed to feed the horse carrots, other young ones found the white-bearded man scary.

A few weeks before his feastday, December 6, St. Nicholas comes to Holland (and Belgium) on his steamer with all his "pieten" and the presents which they prepared in Spain during the year. This event can be seen on Dutch television. From his arrival in Holland till his feastday the children can put their shoes in front of the fireplace.

During the night St. Nicholas visits all the houses by travelling over the roofs on his horse, traditionally a white/grey (called "Schimmel" in dutch), and "zwarte piet" enters the houses through the chimney to put little presents in the children's shoes. Sometimes the children put straw, carrots and water near the shoe for the horse.