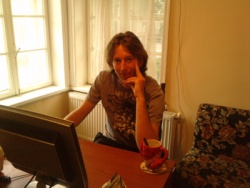 The Bulgarian media is often criticized by politicians and celebrity stars for being intrusive and publishing rumors instead of facts. However, this week’s Berbatov kidnap saga may show many of them that they are lucky to live in Bulgaria instead of the UK, where the rules of journalism seem to have been completely forgotten!

Bulgaria and Manchester United star striker Dimitar Berbatov was reported on Tuesday in many UK media publications to have evacuated his wife and new born baby daughter from Bulgaria after receiving threats from the mafia.

These rumors have since been dismissed as lies by the Interior Minister, Berbatov’s manager Emil Danchev and Berbatov himself. In fact, after coming second to Berbatov in the Bulgaria Man of the Year 2009 competition, Tsvetanov took time to comment on the reports ahead of commenting on the true problem with kidnapping that has hit the Bulgarian business world recently.

In the Tuesday reports the UK tabloids, and even some broadsheets, had a field day with the Berbatov news – filling pages and pages in the process. They even reported that “Berbatov refused to go to police over the threat to his wife Elena and daughter Dea after 'underworld sources' told him that officials from Bulgaria's Internal Affairs Ministry (Interior Ministry) were also in on the plot.”

All of the reports were later allegedly tracked down by the UK Sun newspaper editorial staff to an article they purchased, written by a Bulgarian correspondent, for an Austrian based media called “Central European News.”

This case is of course not the first 'hoax', in fact 2009 has been full of media blunders/hoaxes – maybe the funniest of which I personally watched live on CNN in October as the international news followed a balloon racing across the Colorado sky for an hour suggesting that a 6-year-old boy was inside – of course he wasn’t!

This was preceded by a shootout with terrorists on the Potomac River in the US that never happened.

Social media also seems to be increasing the opportunity for mischief. False reports that Britney Spears, George Clooney, Jeff Goldblum and Natalie Portman had died spread on Twitter and Facebook in recent months, compelling major news organizations to check them out. The latest unfounded death rumor, only this month, concerned Kanye West. There's even a Web site devoted to creating fake news stories about celebrities.

It's been a rough season for non-news but the frightening message is that hoaxes work in the fight for top ratings.

Maybe journalists are overworked and under paid or maybe they are told to create hoaxes by their bosses. Sadly the truth is that whatever the reason many of them have forgotten the former golden rule – ‘check, check and check again’ – as the rush for 24 hour news heats up even more during these tough economic times. Let’s just hope that some of them at least can regain their dignity before they cause more damage than good to a society that relies on them!