Bulgaria to Be Among Hardest Hit by European Climate Change 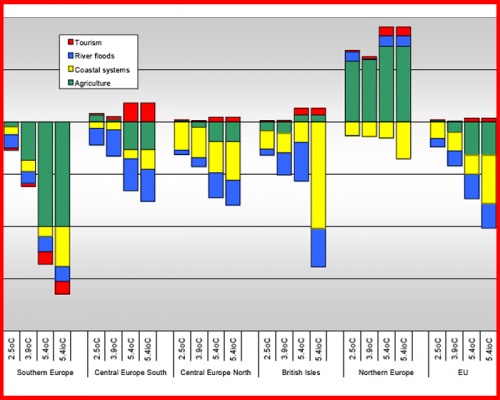 Bulgaria would be among the EU countries worst affected by climate change, according to a new report. Photo by PESETA

Bulgaria, Spain, Portugal, Italy and Greece are the countries that would be worst affected by global warming, according to a European Union report.

The JRC analysis is based on applying the effects of the climate expected in the 2080s, and applying them to the current situation across Europe.

The most badly affected areas, according to this analysis, are Southern and Eastern Europe. Northern Europe would be the sole region to benefit, in economic terms and for the aspects studied in climate terms.

There will be a negative impact provoked by climate change in all four sectors. Drought will reduce agricultural production by 25%, while tourist revenues might drop to EUR 5 B annually. A temperature rise of 5,4ºC is predicted as likely in Eastern and Southern Europe.

Overall, the EU would face yearly GDP losses of between EUR 20 B and EUR 65 B, depending on the precise temperature increase.

The economic well-being, or welfare, of Europeans, historically rising at about 2% annually, would improve less. In Bulgaria, it would fall by 1,3%, and the country would be among those worst affected in the tourism sector

The combination of increased river flooding, and the expected rise in sea levels, would adversely affect an additional 6M people, as compared to 2009.

The report is part of the ongoing PESETA project. Its preliminary results have been incorporated into EC White Papers and other documents dealing with the European response to the impact of climate change.