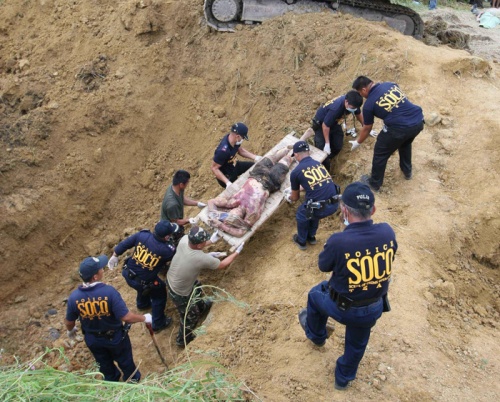 Philippine police and military operatives recover one of several dead bodies dug up along a hillside in Datu Ampatuan, Maguindanao province in the southern Philippines. Photo by BGNES

The President of the Philippines, Gloria Arroyo, has declared a state of emergency in two provinces on the island of Mindanao, to support police investigations of a mass execution.

The declaration has come in the wake of the murder of civilians who had been abducted on Monday as they attempted to file nomination papers for forthcoming elections.

The death toll had initially been estimated at 21, but new discoveries of bodies have raised the figure to at least 46, with officials admitting the possibility of finding even more bodies, after discovering a mass grave containing corpses.

"It's a big area where these bodies were found. They are finding a couple of bodies every couple of hours or so," Interior Secretary Ronaldo Puno has announced.

He described a farming area covered in hastily dug graves, several kilometers away from where the killing is thought to have occurred. A bulldozer was parked nearby.

All the victims were civilians, including the wife of the vice mayor of Buluan, a town in Maguindanao province, who had intended to file nomination papers for her husband to run for governor in local elections next year.

A forensic investigator at the scene told reporters that all the victims had been shot at close range, some in their vehicles and others apparently while fleeing.

The BBC’s Asia analyst, Vaudiine England, commented that: "The brutality of the killings in Maguindanao has highlighted the domination of Philippines politics by guns, warlords and lawlessness.

"It has also changed the nature of "rido", the local word for clan wars and vendetta. Rido has long focused on election disputes or land conflicts and has involved killing, but usually of one person at a time and avoiding the killing of women or non-relatives. This incident targeted women and journalists who were not members of either powerful family involved," she explained.

A prominent Filipino investigative journalist has directly connected the killings to the governments of Arroyo and her predecessors.

"It is an undying fact that Philippines is still ruled by clans and warlords - and these people are monsters created by President Gloria Arroyo and past governments," said Marites Danguilan Vitug, editor of Newsbreak and author of several books on Mindanao, corruption and politics.

With this statement, she implied that there were limited expectations of any effective response to the mass killing from the central government of the Philippines, as it prepares for elections in May 2010.