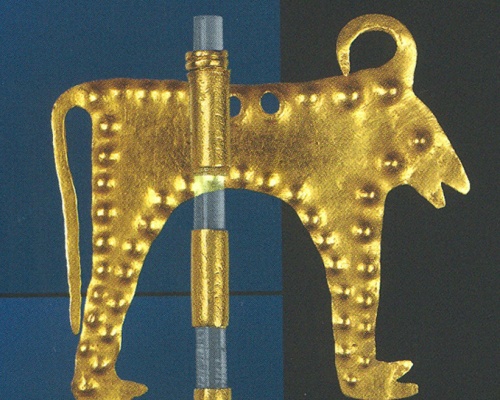 One of the 2 000 exhibits of ancient Danube prehistoric finds from Bulgaria, Romania and Moldova currently on show in New York. Photo by Varna Museum

One of the oldest gold treasures in the world, unearthed at the Varna Necropolis on Bulgaria’s Black Sea coast, is attracting enormous attention at a New York exhibition.

The treasures form part of an exhibition "The Lost World of Old Europe: The Danube valley, 5 000 – 3 500 BC", currently on display at the New York University Institute for the Study of the Ancient World.

Valentin Pletnyov, Director of the Regional History Museum in Varna, has announced at a recent press conference that the exhibits were attracting great public attention. Over 200 people had attended the opening of the exhibition, on November 11, he added.

As well the gold artifacts from Varna, the exhibition is showing a total of 2 000 objects, including ancient treasures from Romania and Moldova, on the northern banks of the Danube.

"The exhibition, arranged through loan agreements with 20 museums in three countries (Romania, The Republic of Bulgaria and the Republic of Moldova), brings the exuberant art, enigmatic goddess cults, and precocious metal ornaments and weapons of Old Europe to American audiences," according to the official announcement of New York University’s Institute.

In addition to the display of the artifacts, there are several film screenings, lectures and a musical performance scheduled as part of the exhibition, which continues until April 25, 2010.

The site was accidentally discovered in October 1972 by excavator operator Raycho Marinov. Research excavation was under the direction of Mihail Lazarov (1972-1976) and Ivan Ivanov (1972-1991). About 30% of the estimated necropolis area has still not been excavated.

To date, 294 graves have been found in the necropolis, many containing sophisticated examples of gold, copper and pottery artifacts. The site is acknowledged to be one of the key archaeological sites in world prehistory.