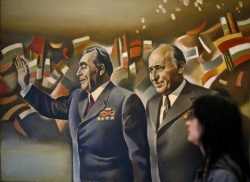 A visitor walks in front of a painting with portraits of Bulgarian communist ruler Todor Zhivkov (right) and Soviet leader Leonid Brezhnev, part of the "Totalitarian art" exhibition at the National Art Gallery in Sofia, July 9, 2009. Photo by GlobalPost

Bulgarians never reconciled with their communist past, and they worry about the present.

The fall of the Berlin Wall rocked Bulgaria in 1989, so much so that the small Balkan republic is still recovering from a kind of post-traumatic stress disorder.

While Germans celebrate the 20th anniversary of the wall's fall, and Czechs and Poles toast the Velvet Revolution and Solidarity, most Bulgarians are likely to treat Nov. 9 as just another day. No grand festivities are scheduled in the capital, Sofia.

The lack of cheer reflects a lack of closure, said experts. Once the Soviet Union’s closest ally in Europe, Bulgaria today is the poorest member of the European Union — a trajectory Bulgarians discuss with a mix of pride and resignation. There is a sense the country has come a long way since the collapse of communism but still isn’t enjoying all the fruits of democracy.

“It’s gloomy,” said Ognian Shentov, chairman of the Center for the Study of Democracy, a Sofia-based think tank. “There is a depressing feeling the transition is not over. There is reform fatigue. Maybe in five years we can celebrate the 25-year anniversary in a better way. But now, probably. we need more time to reflect.”

Bulgaria has been slow to slough off its communist past. Unlike Germany, where the Berlin Wall’s destruction made a clean break between past and present, and neighboring Romania, where a firing squad ended the communist era by executing party boss Nicolae Ceausescu, Bulgarian dictator Todor Zhivkov was ousted quietly in a palace coup on Nov. 10, 1989.

“It was not a revolution that brought Zhivkov down. It was just news on the radio,” said Diana Ivanova, an activist who oversees the nonprofit I Lived Socialism project, a website that collects Bulgarians’ personal recollections of life behind the Iron Curtain.

The communist functionaries who unseated Zhivkov were in and out of power until 1997, when their inept handling of the economy drove crowds into the streets to demand greater change. For the next decade, Ivanova said, Bulgarians largely kept silent about communism, focusing on rebuilding their shattered economy and their successful applications to join NATO in 2004 and the EU in 2007.

As a result, unlike other former Warsaw Pact countries, Bulgaria has never held a vibrant public discussion on the communist era. “We just know part of the story,” said Ivanova. “We don’t know how the people felt. Nobody actually asked them how they felt. This is for me a missing point.”

A commission to declassify Bulgaria’s state security services’ archives began its work in earnest only two years ago, much later than other Eastern Bloc countries. While the commission has triggered minor scandals by exposing politicians as former collaborators, including sitting President Georgi Parvanov, bureaucratic roadblocks hinder complete access to the files.

Recent leaders have given Bulgaria little to cheer about, too. Successive governments have failed to tackle important reforms, such as improving the judicial system and curbing corruption.

Last year, the EU suspended around 430 million euros ($600 million) in aid to Bulgaria because no one could account for how the money was spent. The suspension occurred after years of warnings from Brussels about Bulgaria’s failure to nab high-profile, alleged mafia bosses, who presumably stole the cash.

Many of those alleged mafia bosses are former communist apparatchiks, further stoking cynicism about 1989, said Vessela Tcherneva, an analyst at the Center for Liberal Strategies, another Sofia think tank. Referred to as “mutri,” or mugs, they have grown rich by exploiting their prior government connections to abscond with public cash and property.

“There is still a very strong notion the 10th of November was a coup engineered by the communist elite for the sake of holding on to their privileges,” Tcherneva said. “The Bulgarian transition has been perceived as something relatively unfair. And rightly so. People don’t really see 1989 as something they have ownership over.”

Paradoxically, the lingering power of ex-communists has generated nostalgia for the certainties of the Soviet era, especially among the so-called “red grandmothers,” or seniors who still view Moscow as Bulgaria’s Slavic cousin and protector.

A recent survey by the Pew Research Center’s Global Attitudes Project found that 45 percent of Bulgarians viewed Russia’s influence as positive. Bulgaria came second only to Ukraine, which hosts a large Russian population. The same poll found that 62 percent of Bulgarian respondents said life was better under communism.

Of course, some Bulgarians were positive about the gains of the last 20 years. Zhelyu Zhelev, a dissident who served as Bulgaria’s first democratically elected president from 1990 to 1997, said the absence of commemorations at least shows the real will of the people.

“Bulgarians have a little allergy to big manifestations,” Zhelev said. “During socialist times, it was obligatory to go out on the street and demonstrate. Now they don’t.”

Views on BG » Be a reporter: Write and send your article
Tags: communism, Berlin Wall
Advertisement
Advertisement
Expats.bg All Are Welcome! Join Now!
Related Articles:
More from Views on BG