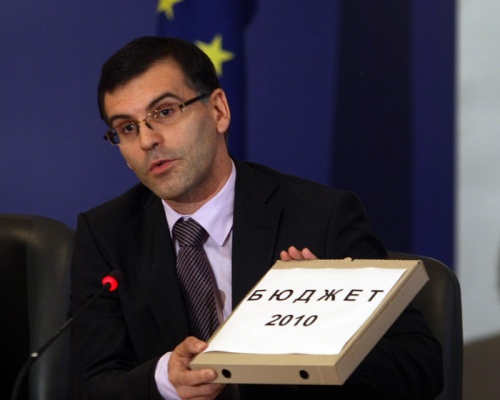 Three economic experts give their assessments of the Bulgarian government's draft budget for 2010. Photo by BGNES

The general opinion of Bulgarian economists is that the government’s draft budget for 2010 can be defined as realistic.

Bulgaria will emerge from the current crisis provided there are no more global cataclysms, according to Petar Ganev from the Institute for Market Economy (IPI). The draft budget for 2010 may be regarded as positive, even though it is not as radical as it should be, in his expert opinion.

“Some reforms have been hinted at; maybe time was short and many potential reforms were left for next year,” said Ganev, pointing out that evidently a balanced budget was a priority for the government.

Insurances could have been reduced by a larger percentage. At the same time, there could have been a more serious shrinking of the expenses part of the budget and removal of tax preferentials for the agricultural sector and concerning corporative taxation, commented Ganev, citing the situation regarding tourism.

“The tourism sector is still taxed at only 7% VAT; this adversely affects market consumption and people’s attitudes,” said the economist.

“Serious income from VAT is fixed, which will only with difficulty come from a greater economic activity at a time when the economy is expected to shrink. They should rather come from better tax collection, and a more efficient organization of the income administration,” the expert pointed out.

The most difficult problem to be overcome is that of unemployment. Any decrease in the jobless percentage will depend on how many new investors appear, and on how many new economic undertakings are initiated, the expert explained.

“Even if the tendency for an economic fall is reversed, there will still be companies that will close due to overdue debts, thereby making people redundant”, the expert pointed out.

Ganev has also expressed his opinion on Bulgaria’s entry into the eurozone.

“It is extremely important for Bulgaria to adopt the Euro, and for this to happen our country has to go through the currency mechanism,” stated Ganev.

“I believe we meet the conditions placed on us and most probably in the next year official steps to enter the currency mechanism will be taken”, he added.

However, Professor Garabed Minassian of the Economic Institute BAN has stated that the rush to enter the currency mechanism and the eurozone is not the best thing for Bulgaria.

“At the moment we do not feel uncomfortable about the fact that we do not have any Euro turnover. The Bulgarian Lev is stable enough, even though that is conditional,” said Minassian.

“Anyhow, we have committed ourselves to enter the eurozone - this is reflected in the legal acts of our admission to the EU, and this will happen, but to rush is not recommended,” said the economist.

A third economist, Lachezar Bogdanov, managing associate of Industry Watch think-tank, has given his observations on the budget’s potential beyond a mere reaction to the current situation.

He commented that the budget policy should not be merely anti-crisis, but a reforming one. “I do not think that the work on the budget aims at fighting the economic crisis,” he said.

“What the government should be doing as policy and in planning expenditure, is to fight for an effective public sector and for a withdrawal of government from the business of citizens,” said Bogdanov.

According to him, this means privatizing the maximum number of activities so that they do not remain in the public sector, but begin to offer their services according to market and competitive principles.

“This is a policy of reforms directed towards more to the market, more to competition and freedom, and consequently to less interference by the state, less administrative control and regulation,” stated Bogdanov.