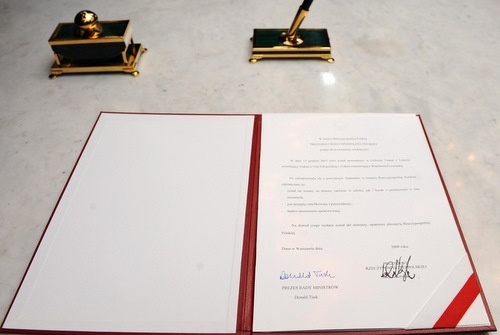 A view of the Treaty of Lisbon ratification document after the signing ceremony at Presidential Palace in Warsaw, Poland, 10 October 2009. Photo by EPA/BGNES

Polish president Lech Kaczynski was to auction off on Monday the faulty pen he used during a signing ceremony of the Lisbon Treaty.

After holding out against the European Union's Lisbon treaty for more than a year, Poland's President Lech Kaczynski had to delay his signature for a few extra seconds on October 10 when his pen ran out.

After Kaczynski sat down at an official ceremony to ink Poland's ratification document with an elegant fountain pen, his initial attempt to sign was unsuccessful. He turned, smiling, to an aide to ask for a replacement.

The pen was up for bids on allegro.pl, a Polish internet auction website, with proceeds set to go to a charity for children with brain damage.

The president's chancellery said it encouraged buyers who were both „euro-enthusiasts who want to take pride in owning the item that was to sign the historic document, and eurosceptics wanting to honor (the pen) for its unique resistance to signing the treaty.“