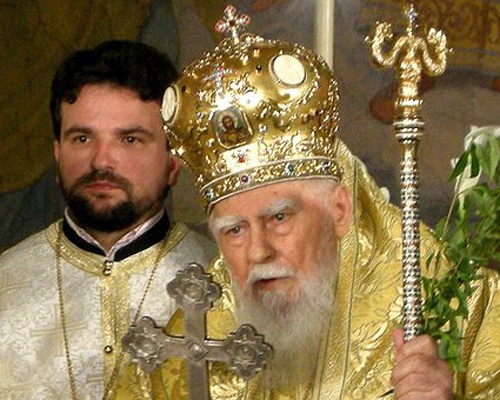 Bulgarian Patriarch Maxim celebrates the occasion of his 95th birthday and receives congratulations from Prime Minister Borisov. Photo from Wikipedia

“Bowing down before your longevity, I would like to convey my special greetings for your long standing ecclesiastical service and for your efforts in upholding the original Christian truths.”, wrote Borisov.

In his letter, the Prime Minister expressed his empathy for the occasion of Patriarch Maxim’s birthday and presented his best wishes for health, strength and longevity, “so that you can continue your apostolic service in the name of the Church and our people”.

Patriarch Maxim was born as Marin Naidenov Minkov on October 29, 1914 and was raised in the Balkan Mountains village of Oreshak. He became a novice monk at the nearby monastery of Troyan before attending Sofia University, where he specialized in Orthodox Theology. He took Holy Orders in 1941.

After a number of promotions within the Bulgarian Orthodox Church, Maxim was appointed as Bulgaria’s Patriarch on July 4, 1971, following the death of the incumbent, Cyril.

Despite the atmosphere of persecution under Todor Zhivkov, Maxim succeeded in defending the church, partly because of support from members of the Politburo.

In the 1990s, following allegations that Maxim had collaborated with the former Communist regime, the church split, with a rival Bulgarian Alternative Synod being formed. Maxim gathered enough support to prevent a complete schism in the Bulgarian Orthodox Church.