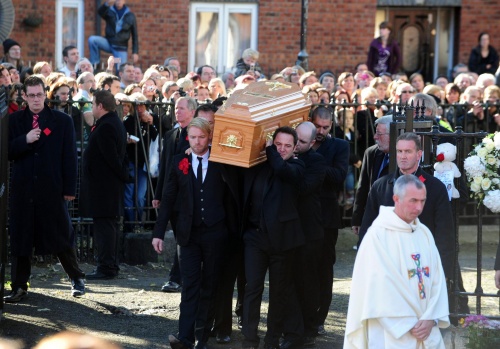 Fans, family members, celebrities and members of the Boyzone band gathered Saturday in Dublin to pay an emotional farewell to Stephen Gately.

The 33-year-old star was found dead at his holiday home in Majorca last Saturday. The post mortem examination in Spain established he suffered a pulmonary oedema, which is an accumulation of fluid on the lungs

Ronan Keating delivered the eulogy in front of mourners at St Laurence O'Toole's church, often breaking down in tears while Boyzone sang Westlife track In This Life during the service before helping to carry the coffin out of the church.

BBC reports that former Irish Taoiseach (Irish Prime Minister) Bertie Ahern, members of Boyzone and Westlife, parents Margaret and Martin, brothers Mark, Alan and Tony and sister Michelle, Gately’s partner Andrew Cowles, manager Louis Walsh were all among the mourners along with hundreds of fans from as far as Taiwan.

David Furnish arrived in Dublin and said his partner Elton John was on tour and could not break his contract, but "was very much there in spirit".

The members of Boyzone had stayed with Gately's body in the church overnight.

Instead of flowers, mourners have been asked to make donations to the Caudwell Children Charity, for which Gately was an ambassador.

The singer will be cremated at Glasnevin Cemetery before 450 guests attend a funeral party in a hotel in the city.

It remains unclear if the Bulgarian student Georgi Dochev, who found Gately dead and has admitted being intimate with the star and his civil partner Andrew Cowles, attended the funeral.