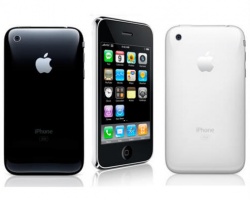 вЂњI can only promise you that our prices will be much more consumer-oriented than Globul'sвЂќ, M-Tel CEO, Andreas Maierhofer, said. Photo by Apple

Maierhofer did not provide any information about the release of the iPhone on the market.

“I can only promise you that our prices will be much more consumer-oriented than Globul's”, he said.

Currently, iPhones are offered in the shops of Cosmote's owned mobile communication company, Globul, at prices starting from BGN 749 for the 8 gigabyte version.

During the Friday's presentation, Maierhofer pointed out that M-Tel intends to focus more and more on the smartphones market. The company plans to double smartphone usage (currently 10-12% of the market in Bulgaria) in the next couple of years.

M-Tel's investments are dedicated to 3G network development, which currently covers about 70% of the population in Bulgaria, Maierhofer said.