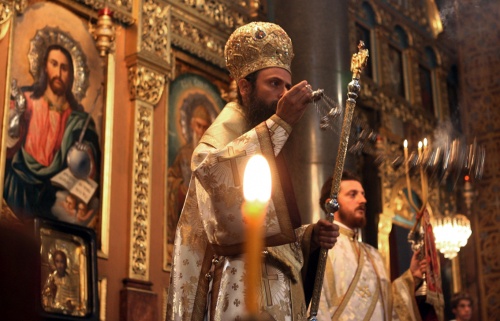 Orthodox Christians in Bulgaria celebrate the day of the Holy Cross on September 14. Photo by Sofia Photo Agency

Monday, September 14 is Holy Cross Day, one of the most important and solemn religious holidays.

During the reign of Constantine, first Roman Emperor to profess the Christian faith, his mother Helena went to Israel and while there undertook a search of places especially significant to Christians. Having located, close together, what she believed to be the sites of the Crucifixion and of the Burial (at locations that modern archaeologists think may be correct), she then had built over them the Church of the Holy Sepulchre, which was dedicated on 14 September 335.

The day has become a day for recognizing the Cross (in a festal atmosphere that would be inappropriate on Good Friday) as a symbol of triumph, as a sign of Christ's victory over death, and a reminder of His promise, "And when I am lifted up, I will draw all men unto me."

Almost a hundred years later Jerusalem was captivated by the Persians, whose king destroyed and robbed the church, including the Holy Cross. The cross has been recovered by the Persians in 628.

The Eastern Orthodox practice commemorates both the finding of the True Cross in 326 and its recovery from the Persians and is considered to be one of the Great Feasts of the church year. September 14 is always a fast day, even if it falls on Saturday or Sunday, and the eating of meat, dairy products and fish is prohibited.

During the All-Night Vigil on the Eve of the Feast, a cross is placed on the Holy Table, on a tray that has been covered with liturgical veil and decorated with fresh basil leaves and flowers, and a candle burns before it.

One of the high points of the celebration is when the priest or bishop brings the Cross out of the sanctuary. He sets it on a table in the center of the temple as the choir sings of the festal Troparion of the Cross.

In cathedrals and monasteries, a special "Exaltation" is performed by the bishop or abbot, standing in the center of the church. This consists of his taking the cross in his hands and raising it above his head. He makes an exclamation, to which the choir responds, chanting. As they chant, the priest makes the sign of the cross with it three times, then slowly bows down to the ground, and stands up again raising the cross above his head as before. This process is repeated four more times to the four points of the compass.

In Bulgarian folklore the day of the Holy Cross is connected to the end of summer and the beginning of fall. This is the day when the day and the night "cross" and become equal in length and the time to sanctify the grain and to begin harvesting the grapes. The tradition includes sprinkling the threshing floor and the house with holy water and setting the table where the priest would lay a cross over a newly woven table cloth. The hosts give the priest vegetables and other boiled food, mostly wheat from the new crop. Many Bulgarian towns and villages organize fairs on Holy Cross day.

September 14 is also the name day of Krastio, Krastan, Kancho for the males, Krastinka for the females.