US PR Analyst: 'Superhero' Image Can Be Dangerous for Politicians 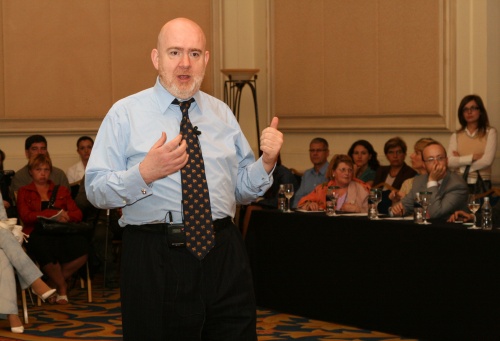 Paul Holmes during the round table on PR business standards in the Sheraton Hotel in Sofia Thursday. Photo by M3 Communications Group, Inc

Leading US public relations analyst, Paul Holmes, believes that having a "superhero" image could be detrimental to a politician.

In an interview for Novinite.com, Holmes said a "superhero" image had the potential of creating a gap between people's expectations, and the actual performance of a politician that could make it harder to govern.

Holmes' comment was in response to a reference to the new Bulgarian Prime Minister, Boyko Borisov, who has had a very powerful public image long before his party GERB won the Bulgarian Parliamentary Elections in July 2009. The US PR analyst explicitly said he was speaking in general since he was not familiar with Borisov.

Paul Holmes was in Bulgaria on Thursday, September 10, 2009, for a round table and a lecture on modern standards at PR business at the Sheraton Hotel at the invitation of the Bulgarian Association of PR Agencies (BAPRA).