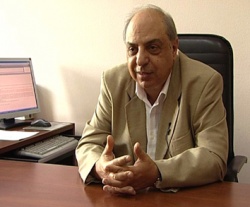 Interview with Robert Jerasi, Chair of the Central Jewish Religious Council in Bulgaria, on the occasion of the celebrations of the centennial of the Sofia synagogue.

The Sofia Synagogue, which can be seen as the symbol of the Jewish community in Bulgaria, is turning 100 years since its opening on September 9, 1909. What is the message of this event?

The message is that we, the Jewish community, have been here - and I hope that we will be here - for many centuries. The idea is that when our ancestors decided to construct this building in this large size and grandiosity - we should also consider the time period when this happened - 1905-1909 - because of this upsurge, a desire to show the development and future of their community in Bulgaria.

So actually the message with this building has been that the Jews have a future and place in this land for many years ahead. With its grandiosity, the synagogue shows that it is not something transient, that our ancestors hoped that Bulgaria would develop successfully and would have the opportunity to live well here, and to remain here.

Many foreigners think it is impressive that there are three temples of three different religions - a church, a mosque, and a synagogue - in downtown Sofia. How would you define the place of the synagogue in Sofia's landscape?

I think that, first of all, in itself, it is a wonderful architecture piece, it was constructed by a very famous architect of the time, who also built the former Chinese Embassy, the Turkish Embassy building, the seminary, among others. The idea was to create a masterpiece that would remain in the landscape of Sofia.

I recently started to say that - you know that the emblem of Sofia is a woman with a crown - that with the repair works and restoration of the synagogue we have polished one of the diamonds of the crown and made it shine in the crown of Sofia. So that it can turn into a significant tourist attraction. We say that the Sofia synagogue is one of the most beautiful in Europe but I would say that perhaps it is the most beautiful.

The Sofia synagogue is one of the largest Sephardi (i.e. of the Iberian Jews) synagogue in Europe. Is it of international importance, how important is it for the Jews in Europe and around the world?

It is valuable most of all for the Bulgarian Jews as a spiritual center, a temple for prayers, and a place where the community gets together on big holidays. It is the second largest Sephardi synagogue in Europe after the one in Amsterdam. Those are the two styles - Sephardi and Ashkenazi.

The Sephardi synagogues are with domes and have a warmer feel in terms of their interior design, while the Ashkenazi synagogues look more like Gothic cathedrals, they are higher, with fewer ornamentation on the inside. I cannot say whether our synagogue has any international importance but I think that all foreigners who come to Sofia would see with interest.

The synagogue is also includes of a museum. How many visitors does it have per year, how much interest does it generate?

I think that between 10 000 and 12 000 tourists visit the synagogue every year; most of them come in the summer.

The Sofia synagogue has been modeled after a synagogue in Vienna, is that correct?

Yes, the idea about it has been taken from the Moorish style; it is octangular, it is very well-lit, and also has the heaviest chandelier in Bulgaria. It is a jewel, anyone who has walked inside it, has been impressed.

What is the attitude of the religious groups in Bulgaria towards the synagogue as the center of the Jewish community?

First of all, we have great relations with the Muslim community in Bulgaria. They are always our guests for all celebrations. The last two days we have welcomed the deputy muftis, and we also expect the Chief Mufti for the large celebrations.

The Catholic priests also visit us very often, and so do the Protestants, and the Armenians, and everybody else.

There is a national council of the religious communities in Bulgaria, where we are want to achieve tolerance and accord in Bulgaria in the relations between the people and the religions.

Which is the most unique personality connected with the Sofia synagogue?

The Bulgarian rabbis who always stood for the synagogue have been fairly important figures in Bulgaria's history after the Liberation (1878). One of the major figures is Arabel Almuzrino who was among the deputies who signed the Tarnovo Consitution (Bulgaria's first constitution - 1879 - editor's note). Your readers are probably not familiar with the fact that he was the person who set up the first fire-brigade in Sofia, and he is in fact the person who saved Sofia from being set on fire by the retreating Ottoman troops in the Liberation War (1877-1878).

The rabbis after him also played a big role in the history of Sofia, for example, Rabbi Ehrenpreis, who is in fact the first rabbi in this synagogue after its completion. He had close relations with Tsar Ferdinand, who often invited him to the royal palace as an erudite in order to discuss various topics. I believe that the Bulgarian spiritual leaders have always been in the center of the state, between the society and the authorities.

The Sofia synagogue has survived World War II. Has it ever been the object of antisemitic attacks?

I can state with pride that the Sofia synagogue has never been desecrated. Even in the harshest times of World War II, it has never been vandalized, sprayed upon, etc.

The only damage that is has ever suffered is from the Anglo-American bombardments of Sofia when a bomb landed on it; fortunately, it failed to explode, it only caused damage with its weight. Unfortunately, it landed exactly in the library, and caused a fire, where a lot of precious books, the whole archive with books on Judaism perished.

Actually, the synagogue's restoration has been dragging since then, and now, at the celebration of its centennial, will be the first time since World War II when it will be fully restored, the way it looked at the time it was opened on September 9, 1909.

The Sofia synagogue is huge - it can fit over 1 000 people. Today it is visited regularly by a lot fewer people. What is you feeling about the future of the community?

The Sofia synagogue was planned for about 1 100 people. And bear in mind that in 1905-1910, there were 10 000 Jews in Sofia. You can imagine how quickly the community grew because in 1947-1948 about 50 000 Bulgarian Jews emigrated to Israel. This has proven the point of the then leaders of the community that the Jewish community had a future in Bulgaria.

Despite that, the positive fact is that we did not have services every day in the synagogue for about 60 years or so but now, starting 5 years ago, we have had them, and the activities in the synagogue have become more dynamic.

Of course, we can't overlook the fact that my generation, born after 1945, was somehow distanced from the religious idea, and we don't believe we can really bring it back to the religious tenets of the synagogue.

However, over the last 20 years we have seen a new generation that has been raised with the ideas of Judaism, with its sense of religious community. We hope it will have a future, and will revive the community of believers in our synagogue.

You mentioned that the large part of the Bulgarian Jewish community emigrated to Israel. What can you say that Bulgaria lost as a result of that?

First of all, we say that Bulgaria has 50 000 ambassadors in Israel. Because unlike the Jews from the other Eastern European states who emigrated to Israel with a negative feeling for the country they used to live in, the Bulgarian Jews left for Israel with great love for Bulgaria, and they always say they have two fatherlands.

This connections is a very warm one, and one proof is that we have a special delegation of 50 people who came from Israel for the centennial celebrations of the synagogue.

It is a fact that the Bulgaria Aliyah in Israel is one of the most successful ones. Those 50 000 Bulgarian Jews produced some of the most successful doctors, lawyers, professors, etc, and maybe if those people had remained in Bulgaria, they would have achieved the same success, and Bulgarian would have an even greater intellectual potential. But life is such that never tolerates emptiness. Those people always come back to Bulgaria when the need arises and they have to help in some way.

Is the Sofia synagogue related to specific events of the rescue of Bulgarian Jews from the Nazi death camps in World War II?

The Sofia synagogue in particular has not been a deportation center unlike the Jewish school in the city of Plovdiv, for example, and other spots where the Jews were rounded up for deportation on March 9, 1943. Even in the hardest times, it has been functioning, has not been closed down, which is an extremely rare occurrence in the history of Europe and the Jews in World War II.

Since our readers are mostly foreigners, could you summarize for them the role that the Jewish community has played in Bulgaria?

I think that even though we are a small community, the presence of Jewish intellectuals has been very tangible in all areas of Bulgarian culture. That is why we had this idea to hold a series of events, instead of a single day of celebrations for the centennial of the synagogue, in order to show a small part of the Jewish contribution to Bulgaria.

We have had an exhibition, a chamber orchestra with pieces from Jewish composers, we are having the actual celebrations, a concert of Sephardi music, which is very interesting. There was the question that we are not presenting the Jewish directors and cinematographers, writers and journalists, artists in Bulgaria but we just cannot do all that in a few days.

I think that we have contributed a lot to the Bulgarian culture, and we feel proud about that; I believe that we are a part of the Bulgarian community, and we hope to live together in future in the same way, without any problems.