EU to Keep Nice Treaty after Irish No to Lisbon 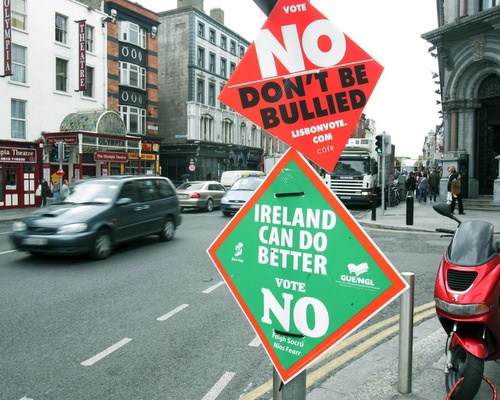 No vote campaign posters are preminent in an area of central Dublin. Photo by EPA/BGNES

There is no second plan, should Irish voters reject the European Union's reforming Lisbon Treaty in a fresh referendum due on October 2, officials said.

"We will respect any decision... If there's a 'no', we will keep (the existing) Nice Treaty (rules)," said Swedish Prime Minister Fredrik Reinfeldt, holder of the EU presidency, at a press conference on Friday.

Reinfeldt was reacting to fresh opinion polls showing an 8-per- cent drop in support among the Irish electorate for the Lisbon Treaty, which is designed to improve the way the 27-member bloc operates following its recent 'Big-Bang' expansion.

The EU's current rules were approved in the French city of Nice in December 2000.

The Irish Times poll found that only 46 per cent of Irish voters now support the treaty, while 29 per cent are against and a further 25 per cent remain undecided.

Irish Foreign Minister Micheal Martin, attending an informal EU meeting in Stockholm, said he expected a 'challenging campaign' over the next month.

The treaty must be ratified by all 27 member states before it can come into force. Aside from Ireland, the ratification process has yet to be completed in Germany, Poland and the Czech Republic.