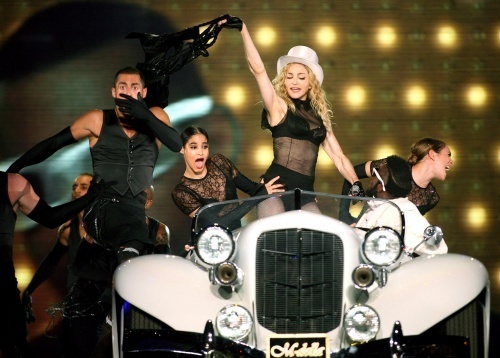 US singer Madonna is pictured here performing on stage during her concert at Izvor Park in Bucharest, Romania, 26 August 2009, as part of her "Sticky and Sweet Tour". Photo by BGNES

US pop star Madonna broke her record for top-grossing tour by a solo artist after her yearlong "Sticky & Sweet" world tour, which wrapped in Israel on Wednesday, pulled in USD 408 M, shows data released by concert promoter Live Nation Inc on Wednesday.

The pop queen played to more than 3.5 million fans at 85 shows, including Bulgaria's capital Sofia. A total of 60 000 fans filled the Vasil Levski Stadium in downtown Sofia in what was the largest musical event of its kind to ever take place on Bulgarian soil, but suspicions of playback singing dampened their joy.

The "Sticky & Sweet" world tour broke the record set in 2006 by Madonna's previous outing, the "Confessions" tour, which grossed 4 million from 1.2 million fans at 60 shows.

A Live Nation spokesman said the previous trek featured many arena stops, while the latest one was centered on bigger stadiums.