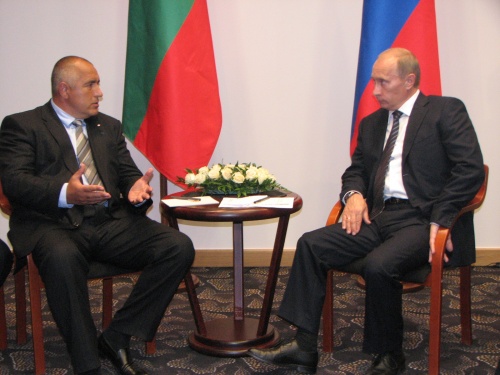 Boyko Borisov (left) and Vladimir Putin (right) during their first meeting in Gdansk, Poland, on Tuesday. Photo by EPA/BGNES

Russia's Prime Minister, Vladimir Putin, has called upon his Bulgarian counterpart, Boyko Borisov, to make a decision on the realization of the joint energy projects as soon as possible.

Putin and Borisov met Tuesday night in Poland's city of Gdansk after the remembrance ceremonies for the 70th year since the start of World War II. The main topic of the first meeting of the two black-belt Prime Ministers was the future of the three joint energy projects - the Burgas-Alexandroupolis oil pipeline, the South Stream gas transit pipeline, and the Belene Nuclear Power Plant.

The Russian Prime Minister told his Bulgarian counterpart that Russia would understand if for some reason Bulgaria decided to give up one of the projects, RIA Novosti reported.

"If for some reason your government discovers that some of the projects is not in Bulgaria's interest, this will not cause any problems in our relations. We are going to discuss the projects that we are going to launch. We will find other projects for cooperation. The only thing that we are asking for is to have your answer as soon as possible," Putin declared.

He cited as an example the Burgas-Alexandroupolis Oil Pipeline and the fact that the discussions for its construction had already dragged for seven years.

Putin also assured Borisov that Russia was ready to provide the Bulgarian government with all the necessary information on the three energy projects. He pointed out that the projects in question were aimed at boosting Bulgaria's geopolitical status, and at creating new jobs in the country.

"We were unable to follow the course of the negotiations and did know the content of the agreements. This is probably why now we may have differences," Borisov said referring to the fact that the actual contracts for the three energy projects are not open to the public.

Bulgaria's Prime Minister, Boyko Borisov, made it clear he saw no issue with the realization of the South Stream gas transit pipeline, a Russian-sponsored rival to EU's project Nabucco, as cited by Interfax. "There are no problems with us about South Stream," he said.

However, Borisov also told Putin the planned construction of the Belene Nuclear Power Plant was the greatest matter of concern in Bulgaria.

Regarding the Burgas-Alexandroupolis oil pipeline the Bulgarian Prime Minister said it was fairly complicated because of environmental issues.

Borisov said that his government would likely become familiar with all documents on the three Russian-sponsored energy projects within one month. He thanked the Russian side for its readiness to send experts to Bulgaria, who would explain details of the bilateral agreements.

Bulgaria and Russia signed the agreements for the three above-mentioned energy projects in January 2008 during the visit of the then Russian President Putin to Sofia. The projects have been supported ardently by Bulgaria's Socialist President, Georgi Parvanov, and the former Prime Minister, Socialist Sergey Stanishev. Upon assuming office in July 2009, the GERB government of Boyko Borisov declared it would review all existing agreements and then make decisions on whether to go ahead with the projects.