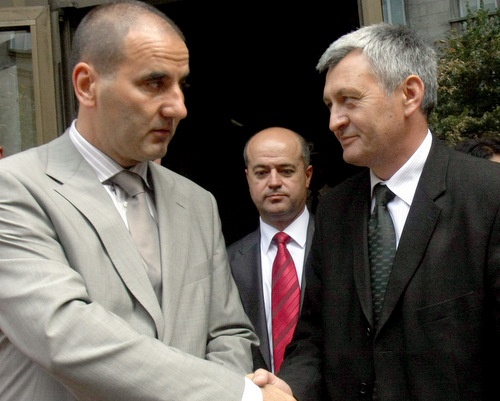 Bulgaria Interior Minister, Tsvetan Tsvetanov (L), announced the plans of the EU team as he unveiled the new head of the Bulgarian Border Police, Zaharin Penov (R). Photo by BGNES

On August 31 a team of EU experts will arrive in Bulgaria to check if the Bulgarian border, as the outside border of the EU, meets the criteria of the Schengen Agreement.

Bulgaria Interior Minister, Tsvetan Tsvetanov, announced the plans of the EU team as he unveiled the new head of the Bulgarian Border Police, Zaharin Penov.

Former Border Police Director, Krasimir Petrov, who was fired by Tsvetanov on Thursday, has allegedly been blamed for not working hard enough on the absorption of EU Schengen funds. BGN 161 M has been made available from the Schengen agreement for guarding the Bulgarian borders - to be used in buying helicopters and technical security equipment.

It emerged after Petrov was fired that only BGN 33 M has been absorbed so far and that if the rest of the money is not used by the end of the year Bulgaria will have to return it.

Currently, Bulgarian citizens are allowed visa-free entry into the Schengen system and there is eased access to Bulgaria for Schengen visa holders, but the country is not a full member of the system.

Bulgaria submitted its formal declaration of readiness in September 2007 and sent European authorities follow-up reports, penning in March 2011 as the target date for accession to the Schengen zone.

The estimates turned meaningless due to a delay in the award of a tender to produce biometric passports and lack of progress on the second generation of the EU's Schengen Information System, more commonly known as SISII.

The 1985 Schengen Agreement is an agreement among most Western and Central European countries which allows for the abolition of systematic border controls between the participating countries.

By the Treaty of Amsterdam, the agreement itself and all decisions having been enacted on its basis had been implemented into the law of the European Union.