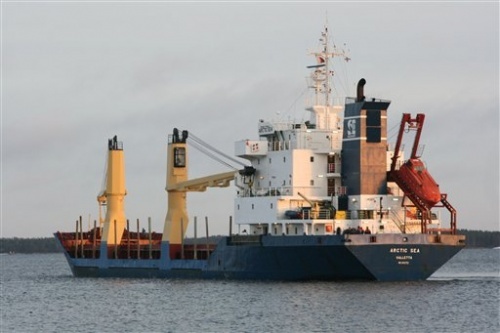 The Arctic Sea was last sighted in the Bay of Biscay on 30 July, according to Russian media. Photo by huffingtonpost.com

A ransom has been demanded for the hijacked Arctic Sea ship that went missing off the coast of France two weeks ago.

A Finnish police officer told Russian news agencies on Saturday that a demand had been made in connection with the Russian-crewed Arctic Sea.

Detective chief superintendent Jan Nyholm said: "Yes, it is true that there has been a demand for a ransom, which is money."

"The demand has been made to the company which owns the ship, Solchart Management in Finland," he added.

There have been conflicting reports of the whereabouts of the vessel, with a Russian maritime website suggesting it was in the Bay of Biscay on Friday.

Other reports suggested it was more than 3 200 km further south near Cape Verde.

The Arctic Sea was last officially sighted in the Bay of Biscay on 30 July, according to Russian media.

One source said that it had been seen some 400 miles from the Cape Verde islands, off West Africa, the BBC reported.

Russian navy ships have been searching for the 4 000-tonne Maltese-flagged vessel, which had been carrying timber.

Observers have suggested the ship was hijacked, possibly because of a Russian commercial dispute.

Carrying timber reportedly worth USD 1.8 M, it sailed from Finland and had been scheduled to dock in the Algerian port of Bejaia on 4 August.

Earlier in its voyage, the ship reported being boarded by up to 10 armed men as it sailed through the Baltic Sea on 24 July, but said the intruders left the vessel on an inflatable boat after 12 hours.