Ambassador: US Companies with Serious Interest in Belene NPP 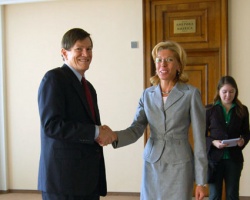 Ambassador Ordway (left) and Minister Jeleva (right) during their meeting on Thursday. Photo by Foreign Ministry

American companies are interested in the project for the construction of Bulgaria's Belene Nuclear Plant, according to Ambassador John Ordway, the Interim Chargé d'Affaires of the US Embassy in Sofia.

His Excellency made it clear that the USA was going to continue to support Bulgaria's efforts in key spheres such as combating corruption and organized crime, and judicial reform.

Minister Jeleva raised the question of Bulgaria's inclusion into the US Visa Waiver Program, which she presented as a matter of high public importance.

Ambassador Ordway pointed out that joining the VWP was a complex process that would take time for Bulgaria as it was taking time for Poland and some other EU member states.