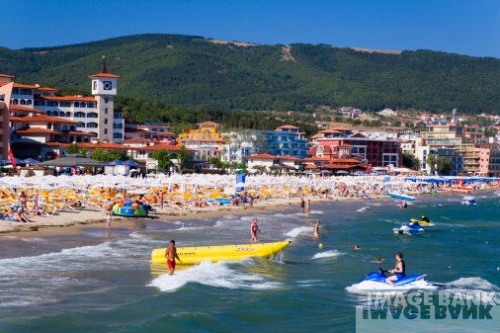 Bulgaria's beach resorts offer plenty of bang for the buck.

It's no secret that the Black Sea Riviera, located on the coast of Bulgaria, is a gem, what with its stretches of golden sand, picturesque fishing villages, lively nightlife and very reasonable prices.

But how do you choose which of the riviera's many resorts to chill out at? Here's a primer on the various options available to you:

Sunny Beach: Party town
Sunny Beach is the biggest and most popular resort in Bulgaria, blessed with the longest and widest beach on the coast. It's also very clean, with a Green Flag award to prove it. The town itself with its maze of winding streets is a short distance from the beach, which is lined with hotels. There's something for everyone here, including watersports, mini golf, aqua park, bars, restaurants and discos that attract crowds of hedonistic teenagers.

Golden Sands: Modern
Golden Sands competes with Sunny Beach for the title of best beach resort and attracts both older visitors that prefer resting by the pool, families with children that enjoy the beach and Scandinavian youths that party all night long. Golden Sands is more like any other seaside resort in Europe than any of the other Bulgarian resorts - for good and bad.

Nessebar: Commercial
Southeast of Sunny Beach is the town of Nessebar, a UNESCO world heritage site. Set on a rocky islet connected to the mainland by a tiny road, it's the beautiful old wooden houses, cobblestone alleyways, museums and medieval churches that have put the little town on the map. High season brings a deluge of souvenir shops and coach tours.

Sozopol: Genuine charm
This ancient town on a narrow peninsula is what Nessebar must have once been like, before the invasion of low-end commercial mass-tourism. There are quite a few cozy lounge bars in the cobblestone alleys that weren't there 20 years ago, but otherwise the traditional wooden houses are being refurbished, the ambiance is laid back, several of the restaurants have a nice ocean view and there are two great beaches here. A few kilometres further south there are sandy beaches that stretch for several kilometres.

Balchik: Mini beaches
Further north, the small unspoilt town of Balchik lines a mountainside along the beach. This holiday spot is popular with families with children, who crowd the tiny beaches. The sandy beaches here are man-made, but there are stretches of rocky shoreline and jetties to swim off. The main tourist sight is a royal summer residence with a large botanical garden.

Albena: Car-free
Partly car-free, the purpose-built holiday town of Albena was built in the late 1960s and is easily recognizable by its pyramid shaped hotels. One of the more expensive resorts on the coast, the hotels are spread out over a large green area by the sea.

It is very quiet here, with a nice beach, great watersports, and nearby historical villages and picturesque coastline. It feels like a resort for pensioners who want a quiet time and nothing to do.

Obzor: Footnote
Half way between Varna and Burgas is tiny Obzor with 2,000 inhabitants. It is a scruffy little town with a few restaurants lining a square and a few insignificant Roman ruins. But there is a nice sandy beach.

Sveti Konstantin: Relaxed
Sveti Konstantin is the beach resort just nine kilometrews from the port city of Varna, the third biggest city in Bulgaria and one of the most attractive cities in the country. Here modern, stylish hotels are appearing at record speed along the beaches. A pleasant place, but mainly popular with locals taking a weekend break from Varna.

Elenite: Mainstream
This purpose-built resort in a bay is famous for its therapeutic waters, pretty well run and a sedate place in the summer.

Hotels are scattered through a forest that runs alongside a long sandy beach. If you are looking for quiet nights stay here and take the bus to Sunny Beach in search of party.

Primorsko: Cheap
A cozy and relatively undeveloped resort on the southern part of the coast that mainly attracts tourists from Bulgaria and Eastern Europe. The city has a long beach with shallow water. Most tourists stay in self-catering accommodation, but there is a gigantic hotel near the beach. There is good shopping, the food is authentic and there are several bars with cozy sofas to hang out on and sip cheap drinks. You can choose between swimming in quiet waters or big waves.

Good to know
Stay: There has been a surge in new hotels the past 10 years and the standard is pretty good. There are also many private rooms to let.

Eat: The Bulgarian cuisine is influenced by the Turkish, with meze and grilled dishes. Beer is cheap and some Bulgarian wine is very good value.

Plan: In July and August the beaches are crammed with tourists. The summer season lasts from June to early September.

Views on BG » Be a reporter: Write and send your article
Tags: Bulgaria, Black Sea
Advertisement
Advertisement
Expats.bg All Are Welcome! Join Now!
Related Articles:
More from Views on BG