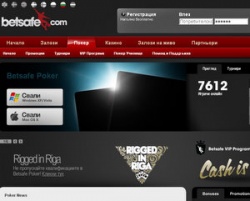 Betsafe is reported to be offering online gambling in Bulgaria illegally.

Bulgaria loses hundreds of millions of BGN each year as a result of the activity of illegal operators of online gambling.

This has been reported by the BGNES agency which cites data provided to it by representatives of the State Gambling Commission.

A representative of the Commission, Simeon Simeonov, is quoted as confirming that the companies providing Internet gambling and bets in Bulgaria are unlicensed. The Commission has reportedly imposed dozens of fines on such companies.

BGNES cites Alexander Tumparov, Deputy Chair of the Bulgarian Association for Entertainment and Gambling Games, as saying that the unlicensed online gambling operators working in Bulgaria were in violation of nine different laws. BGNES reports that these revelations about the online gambling in Bulgaria were made during a seminar on bookmaking in Sofia sponsored by the unlicensed gambling operator Betsafe.