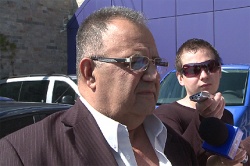 In Dimitrov's words, the Bulgarian politicians' determination that Macedonia's acceptance to the European Union and NATO has started to weaken. Photo by WTV

The Bulgaria minister without portfolio, Bozhidar Dimitrov, described Macedonia as a country which suffers from identity crisis.

He stated so Monday in an interview for the Bulgarian television bTV.

"There was a unique law in which being a Bulgarian was described as a criminal offense, and could get you between 3 and 5 years in jail. There is not such law any more, but Bulgarians are being persecuted in any possible way. This is an attempt to stop the process of re-Bulgarization".

Dimitrov commented on the recent case with the jailed Bulgarian citizen in Macedonia, Spaska Mitrova.

"With such cases Macedonia is trying to pass its problem, its identity crisis to Bulgaria, Greece, and Albania. Of course, we cannot agree with that", he added.

He asserted that he would do anything possible to send Bulgarian medics to examine Mitrova, because it became clear that her medical condition had worsened in the last few days.

"This case is first of all humanitarian, then juridical. I suppose that despite the bad medical condition of Mitrova, Macedonia will keep her in prison, just to show how determined it is to defend its national interest", Dimitrov said.

In his words, the Bulgarian politicians' determination to help Macedonia's acceptance to the European Union and NATO has started to weaken.