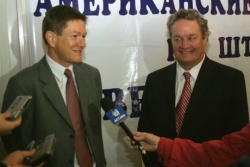 Former US Ambassador to Kazakhstan, John Ordway (left) will head temporarily the US Embassy in Sofia. Photo by kazakhstan.usembassy.gov/

Ambassador John Ordway is going to serve as the Interim Chargé d'Affaires at the US Embassy in Sofia, the Embassy press service announced Friday.

His Excellency has arrived in Bulgaria on Friday, August 7, and will serve as Interim Chargé d'Affaires until the latter part of this year.

Earlier this year, Ambassador Ordway served as the Chargé d'Affaires in Vienna.  His prior ambassadorial posts include the Republic of Kazakhstan from 2004 to 2008, and Armenia, where he served from 2001 to 2004.

"The U.S. Embassy does not have any information on the successor to Nancy McEldowney as U.S. Ambassador to Bulgaria. That announcement will be forthcoming from the Office of the President in the White House," reads the official statement of the Embassy.