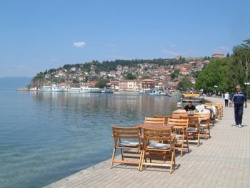 The Ministry doubts the way the authorities have acted, and the motives of the Macedonian court, describing them as not entirely juridical. The Ohrid lake (on picture). File photo

The Bulgarian Foreign Ministry has decided to interfere in the case with the Bulgarian citizen Spaska Mitrova who has been sent to jail in Macedonia.

The Ministry aims to help investigating the case and taking the needed actions in order Mitova to be released from custody.

This has been announced in an official statement of the Bulgaria Ministry of Foreign affairs, after the Macedonian ambassador, Divna Trichkovska, was invited for talks by the Bulgarian side.

"A verdict which takes away and imprisons the mother of a small child because of an everyday quarrel, and the child is taken to a social service home, cannot meet our criteria for humane behavior, and does not meet European criteria in similar cases", the announcement says.

The Ministry doubts the way the authorities have acted, and the motives of the Macedonian court, describing them as not entirely juridical. According to the Bulgarian side, there are evidences that the motives have something to do with Spaska Mitova's publicly demonstration of Bulgarian self-awareness.

"Bulgaria will consider the Macedonian approach to similar cases as one of the criteria by which will show the country's readiness to make the changes which will allow it to start its European integration", the Ministry's letter says.