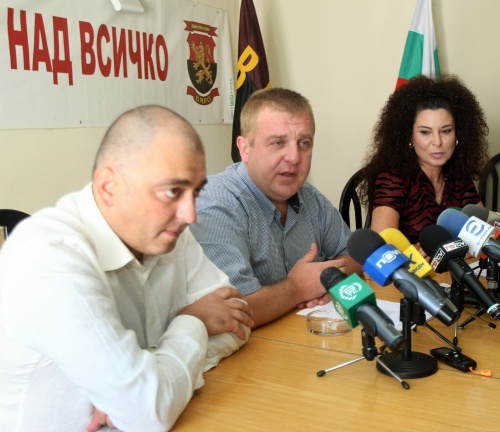 VMRO leader Karakachanov (middle) has raised alarm over the case of Spaska Mitrova, a 23-year-old Macedonian woman with a Bulgarian passport. Photo by BGNES

The measures demanded by the VMRO, which is a descendent of the Internal Macedonian-Adrianople Revolutionary Organization from the end of the first half of the 20th century, including reinstating visa requirements for Macedonians citizens, and vetoing Macedonia's accessions to NATO and the EU.

"Bulgaria must be prepared to impose vetoes on Macedonia's accession to the EU and NATO unless Macedonia stops the repressions against Bulgarian citizens", Karakachanov said at a special press conference on Sunday.

On Friday the VMRO demands that the Bulgarian government summon the newly appointed Macedonian Ambassador to Bulgaria to explain the actions of the Macedonian authorities on the case of a 23 Macedonian woman, Spaska Mitrova, who holds Bulgarian citizenship.

Mitrova, a native of Gevgelija in Eastern Macedonia, has a degree from the Southwest University in Bulgaria's Blagoevgrad but was fired from her job in a Macedonian high school with the explanation that Macedonia did not recognize Bulgarian university diplomas.

She was also sentenced to 3 months in jail even though she recently had a baby, because she did allow her former husband to stay at her parents' home in order to visit their child after the divorce. The reasons why Mitrova requested a divorce had to do with her former husband constantly abusing her physically, and insulting her because of her national identity.

Karakachanov explained that the VMRO party was starting to collect donations for Mitrova, who is unemployed, and also suffers from breast cancer. He was positive that during the judicial proceedings against Mitrova, the Macedonian authorities committed many violations of the due legal process.

"People with Bulgarian self-consciousness in Macedonia are being repressed. We insist on serious state measures", Karakachanov said adding that the Bulgarian state must appeal Mitrova's sentence before Macedonia's Supreme Court.

VMRO is going to wait for a week for the Bulgarian authorities to take action on Mitrova's case; after that it is going to protest before the Macedonian Embassy in Sofia.

The VMRO party welcomes the creation of the office of Minister without Portfolio in charge of Bulgarians abroad but believes that a special Ministry would be better for this purpose.

Karakachanov said that any lustration laws for the persons involved with the former intelligence of the communist regime were very belated, and that now any former agent or collaborator had to be evaluated individually for his activities in the past.

Bulgaria's new Minister without a portfolio, Bozhidar Dimitrov, is known to have been agent in the cultural section of the former State Security service spying on the Vatican in the 1970s and 1980s.