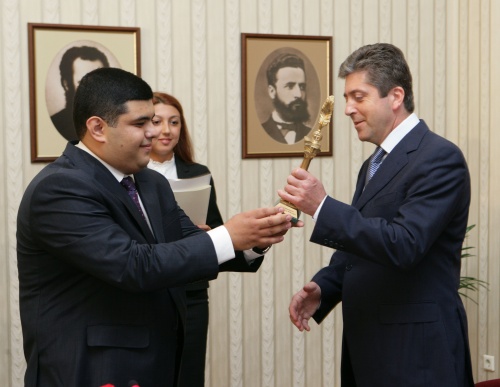 Parvanov (R) expressed his gratitude for the appreciation of his activities by Azerbaijan. Photo by president.bg

Bulgaria President Georgi Parvanov has been awarded the International Prize Ilyas Efediyev by an Azerbaijani official in Sofia.

Parvanov was awarded the prize for his "work on the prosperity of the world and democracy", by the President of the Ilyas Efendiyev Foundation Tural Efendiyev at an official ceremony in Sofia, Azerbaijani Trend News reported.

Parvanov expressed his gratitude for the appreciation of his activities by Azerbaijan. He said that Bulgaria, as a member of the EU, considers cooperation with Azerbaijan in various spheres as one of the priority issues.

The International Prize Ilyas Efendiyev was also awarded to the Prime Minister of Turkey Rajap Tayyip Erdogan in the category "For the activity of foreign citizen on agitation and correct evaluation of the realities of Azerbaijan."

Ilyas Efendiyev (1914-1996) was a famous Azerbaijani playwright, known as the people's writer.